Newly-dubbed The Mailroom Fund, the members of this diverse partnership have made their first investment, a seed financing round in a social network application metrics company called Sometrics. While questions swirl around the value of social networks and their third-party applications, the fact that this cross-section of investors invested in this Los Angeles company makes a great deal of sense.

We just wrote about the latest projections on advertising spending in social networks. One of the key factors holding back advertisers is that they don’t know enough about who they’re advertising to and how effective that advertising is.

Social networks contain the data necessary to figure this out — it’s a solvable problem, and that’s where Sometrics could come in. Competing against established rivals like Adonomics and Social Media’s Appsaholic, it publicly tracks a wide set of user data. As we’ve noted, metrics aren’t just important for developers, they’re important for advertisers trying to make use of these newfangled social application contraptions. 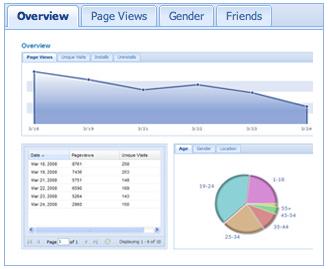 Features include maps showing user saturation, pie charts of age breakdowns, a way to measure traffic by day or multiple days, and the ability to export this data to Excel.

Of course all this isn’t an actual advertising program, but it’s a step in that direction.

Why does a Facebook metrics company make sense for these investors? William Morris wants to understand what’s happening on social networks to promote the stars they represent. Accel, an investor in Facebook and many digital media companies, has already said it’s looking to invest in more social network application companies. AT&T, meanwhile, sees social networks making inroads on mobile devices, and wants to learn more about the space. Greycroft Partners also participated in the round — the firm has invested in blogs like PaidContent.org and The Huffington Post and knows that blogging and social networks are intertwined.

Sure, social networks aren’t making money yet, but they’re taking the attention of millions, especially younger people, away from television. These investors, and many other companies, need to learn fast about digital media, and what better way than to develop a tight relationship with a metrics startup?