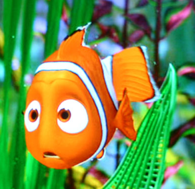 While Hollywood in general still seems relatively uneasy about putting its feature films online, Disney has decided the time is right — in a limited way at least.

Disney’s popular show “The Wonderful World of Disney” showcases films from its catalog on prime time television once a week. Now those same films will be placed online; that means viewers don’t have to be in front of their TVs on Saturday nights to catch the show, according to the Los Angeles Times.

The films, which will appear on Disney’s website, will be shown for free but will be ad-supported. The hit film Finding Nemo is the first of these moves to go online, but it will only be available to watch until June 13. After that, Disney will put up the next film, Monsters, Inc.

While we’re not likely to see newly release films avilable online for free anytime soon, studios releasing some of their catalog films with ads seems like a smart move. Other studios are starting to do this as well on services like Hulu. In fact, if you’re not into the more family-oriented fare of The Wonderful World of Disney, you’ll probably like some of Hulu’s selections, including The Usual Suspects, Sideways, 28 Day Later and The Big Lebowski.

Now if only we can get Hulu and Disney.com onto our television sets, so we don’t have to watch them while sitting at the computer.