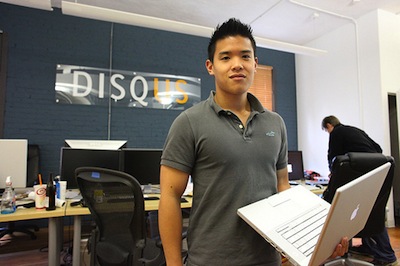 Disqus, a startup offering a commenting system across a number of sites (including VentureBeat), says it’s turning four years old this week, and it’s using the occasion to reveal some big numbers. Not quite the biggest, but perhaps the most important is the fact that the company has raised $10 million in new funding from North Bridge Venture Partners and Union Square Venture Partners.

The company says it’s seeing rapid growth, having more than doubled the amount of unique visitors to Disqus sites since November 2010, from 200 million to nearly 500 million. There are now 750,000 “communities” using Disqus and 35 million commenters have created profiles. The company is also pointing to a recent study by Lijit showing that 75 percent of sites using a third-party commenting system use Disqus.

All of that adds a little substance to the comments earlier this year by co-founder and chief executive Daniel Ha (no relation to me) that he wasn’t too worried about the threat from Facebook’s new commenting system for publishers.

“They’ve put a stake in the ground –- they see a lot of value in what we do,” Ha said at the time. “But we haven’t seen [Facebook] make a dent in our traction, which is why we aren’t shaking in our boots.”

San Francisco-based Disqus was incubated at Y Combinator. It previously raised a $500,000 round from backers including Union Square, Knight’s Bridge Capital Partners, Naval Ravikant, and Aydin Senkut (who is also an investor in VentureBeat).