As if our Facebook news feeds weren’t already polluted enough.

In my Facebook news feed at this very moment, I have a “Trending Now” post from a news organization I did not like or follow, a “Suggested Post” from a career college selling me a diploma to teach English in foreign countries, then after about five actual posts from real friends, another Suggested Post. 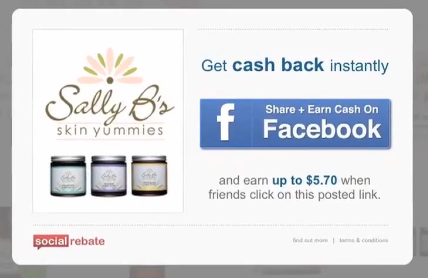 That crowded and much-advertised-to news feed might get more polluted soon, as a startup called Social Rebate is offering Facebook users money to share their recent purchases on Facebook. One customer who did, the company says, made $15 back on a $75 purchase.

The problem is that it threatens to turn a social space into a space just about commerce. Another it that it will give a whole new meaning to the term “native ad.”

“Don’t click ‘Like’ unless you’re getting paid to,” the company’s pitch email reads. “It’s a win-win — customers earn back some of the money from their purchase and retailers spread the word about their brand and product!”

That’s all very exciting, and I’m sure it gives retailers wet dreams — as well as those wonderful people among us who are always hawking something from Avon or Amway or another multi-level marketing agency — but it threatens to fill up our “social” network with things that have little to do with friends, family, or community, and a lot to do with cold hard cash. And, in the process, displacing the very community that Facebook exists to create.

Social Rebate is excited about it too. Using its service, the company says, retailers can turn “their customers into mini-marketing agencies!”

That’s exactly what I’m afraid of.

Social Rebate says it already processes “millions of clicks,” indicating that the service is doing well. That makes sense, because in the startup’s pricing model, there’s no risk to retailers, who only pay a percentage of the rebates that they get paid. In other words, this is cost-per-action marketing: no action, no cost. And, of course, no revenue for Facebook, on whose network this revenue is being made.

Retailers who participate in the service integrate Social Rebate into their checkout systems, offering customers a bribe (errr, rebate) if they agree to essentially become a loosely-joined long-tail marketing arm of the company. If they do, the purchase finalization step also publishes a marketing message on Facebook — or Twitter, Google+, Pinterest, or LinkedIn.

“By plugging into your e-Commerce platform’s receipt page, our software allows you to incentivize your customers to share YOUR marketing with THEIR friends AFTER they purchase from your site,” Social Rebate says. The service is already pre-integrated with Shopify, Magento, Etsy, and five other major e-commerce platforms.

There’s a lot to like about social commerce, and there’s a lot of value for companies in social referrals. Theoretically, incentivizing customers for spreading the word about you is great, but actually, the best word-of-mouth is untainted by commercial considerations — something that people do just because they love your products and love your company. Adding cash to the equation makes motivations suspect as well as filling up news feeds and Pinterest boards with commercial messages posing as friends’ status updates.