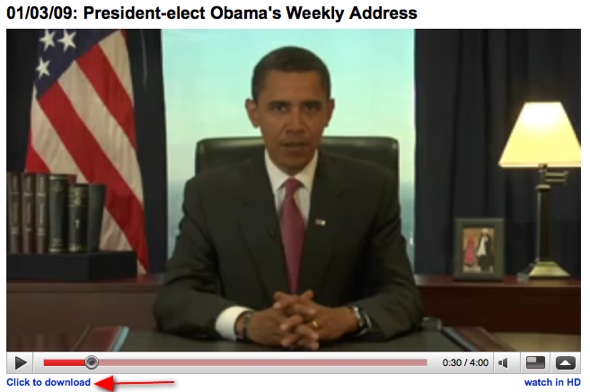 This seems like a golden age for watching politicians on YouTube. President-elect Barack Obama is delivering weekly addresses on the video site, and both the U.S. Senate and House of Representatives just launched their own YouTube channels. This is all great news … unless, of course, you’re a YouTube competitor, or you don’t think the Google-owned site should control such a major communications channel between elected officials and voters. That’s why CNET’s Charles Cooper argued of the congressional YouTube channels, “You should be able to download high-res videos and save them to use in mashups, mixing, etc.”

That isn’t possible yet, but those features could be imminent. If you watch Obama’s recent addresses, or other videos in the Change.gov YouTube channel, a new option has appeared: a button that says “Click to download.” (It doesn’t show up in embedded videos.) This was already an option if you watched the videos at the Obama transition team’s Change.gov website, but not on YouTube.

Now, I don’t see this feature on the videos on the House or Senate channels, but Harvard Prof. and Obama adviser Lawrence Lessig says the feature is being rolled out slowly, first on “open goverment”-related videos, then more generally. I’m not sure if that means you’ll soon be able to download, say, your favorite music videos or TV show clips from YouTube; it would be pretty amazing if that was the case.

Meanwhile, Microsoft just made an announcement showing that YouTube (and the site’s Flash video format) doesn’t have a monopoly on Obama footage. Video from Obama’s inauguration will be streamed on the Presidential inauguration website using Microsoft’s Silverlight format.