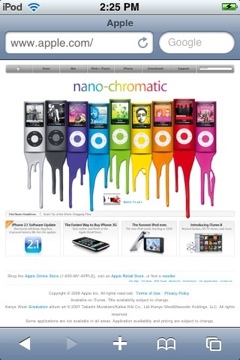 Since the iPhone 2.1 software update corrected many of the serious usability issues users were having with the device, Apple can use subsequent updates to focus on adding new features. It appears the 2.2 software will do just that. An early build has been seeded to developers and the first leaks are coming out now.

The biggest noteworthy change so far is that the Safari mobile browser has been revamped, according to iPhone Atlas, CNET’s iPhone blog. The screenshot of the new browser (right) show that Apple has decided to place a search bar alongside the web address bar along the top of the browser. This will look similar to how Safari looks now when held in landscape mode (horizontally), but is only activated when you click on the web address bar. With the new layout, users will have one-click access to search rather than two-click.

Also changed is the refresh button, which has been moved into the web address bar. This is undoubtedly to save space and make room for the search box in the new UI.

One big feature that people are waiting for but has yet to show up in the iPhone OS is copy and paste functionality. This is still nowhere to be found in 2.2, according to Wired, but that site goes on to speculate that Apple may either never include it or is working on a completely new way to think about copying and pasting. Otherwise, what is taking them so long to include it? After all, third-party developers came up with a solution recently, only to have Apple quash it.

Another feature that’s notably not talked about in the 2.2 software build thus far is the Push Notification service. This is the system that will allow applications to send updates to iPhone users without having the programs running in the background. While the service was detailed at WWDC back in June, it may be running behind schedule now. A MacRumors forum member reportedly received the following message, which may or may not be from Apple chief executive Steve Jobs regarding the Push Notification system:

We’re running a bit late. We want to get it 100% right the first time.

…and hopefully not as late as Windows Mobile 7.