Web sites such as YouTube get so much traffic for their videos that the processing load can be crushing, leading to huge server and bandwidth costs.

To deal with that, Elemental Technologies is announcing new servers today that take advantage of the computing power of graphics chips in order to process lots of video simultaneously. The result may be much lower costs for video sites and a better viewing experience for consumers.

The Portland, Ore.-based company is introducing Elemental Servers in beta form today and commercially later this year that will have four graphics chips and two microprocessors. Those servers could process seven or eight times as much video in the same time that microprocessor-only servers can. 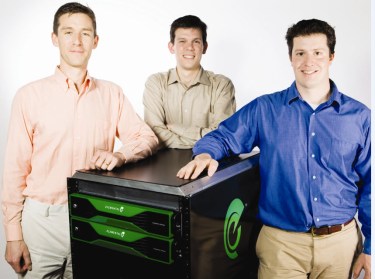 Sam Blackman, chief executive officer of Elemental, (pictured middle with his co-founders Brian Lewis, left, and Jesse Rosenzweig, right), said the new servers rely on software that taps the CUDA programming environment from graphics chip maker Nvidia, which has been investing in what it calls GPU computing (graphics processing unit) for the past couple of years. Blackman said that in the past, people who wanted to process video quickly would have to create custom chips. But he can get by using off-the-shelf Intel microprocessors and Nvidia graphics chips.

The Elemental Servers will specialize in encoding, or taking a film and turning it into a digital video, or transcoding, which converts a video from one format to another. Most of the processing tasks at companies such as Google’s YouTube are based on transcoding. That’s because users upload video in a couple of hundred video formats and YouTube transcodes them into something that works on its web site.

Graphics chips are better at this than microprocessors because they do tasks in parallel, rather than a serial fashion. Blackman said his servers can process 32 different streams of video, or as many as four streams of 1080p high-definition video, at the same time.

Besides YouTube, other beneficiaries of this kind of server are video sites such as Brightcove, which is one of the beta customers. Adobe is another beta tester. There are plenty of other sites that could benefit, from Netflix to Ooyala.

Elemental previously launched its Badaboom Media Converter software to convert video so that it could be transferred quickly from a computer to an iPod and other mobile devices. And Elemental also launched an accelerator product for Adobe’s editing software.

Now it’s taking the core technology that made its consumer technologies possible and is making it available to enterprises. Blackman said the company has been working on Elemental Servers for nine months. The company now has 20 full-time employees and five contractors. Prices haven’t been set for the servers yet.

Blackman said the company is shooting to become cash flow positive in 2009, though it depends on how fast the company rolls out its servers. Elemental was formed in August 2006 by a team of former engineers at chip maker Pixelworks in Oregon. It has raised $7.1 million to date in funding from Nvidia, Voyager Capital, General Catalyst Partners and angels.