Throw out the blackbird pie, Twitter has finally served up a new dish of embeddable tweets that is actually digestible.

Twitter released a brand spanking New New Twitter option called “embeddable tweets” Thursday. The feature makes it simple for folks to pull tweets from Twitter and paste them, with all their Twittery-goodness in tact (reply, retweet, favorite and follow options), elsewhere on the web.

“[Every tweet is] a dynamic piece of media, and we believe that everyone should be able to view and interact with Tweets on the Web in the same ways you would from any Twitter client,” Twitter developer Brian Ellin said.

“Wait a minute,” you say. “Didn’t I read something about an embeddable tweets feature more than a year ago?”

Yes, you did. The embeddable tweets feature was then just a makeshift and clunky option called “Blackbird Pie” that regular folks and super users alike scoffed at. This time around, embeddable tweets is a useable product. So useable, in fact, that WordPress.com users need only copy the URL of a tweet and paste it into a blog post (as I did above). Posterous, a blog and private-sharing platform, also now supports super fast-and-easy tweet embedding.

Everyone else can navigate to a tweet’s permalink page via the New New Twitter (you’ll want to click on the “Details” option on the tweet), and then select “Embed this Tweet” to grab the proper HTML code.

Be forewarned: The feature could use a little extra time in the oven. We noticed sluggish tweet loading times in testing. 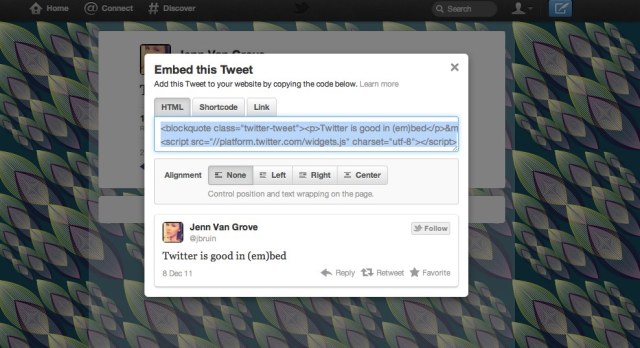