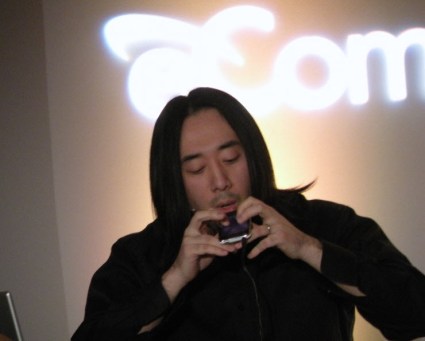 Smule’s big hit is Ocarina, a cool app that we’ve written about a few times where you blow into the microphone of the iPhone to make the surprisingly rich sound of an ocarina flute. Nearly 700,000 people have bought the 99-cent iPhone app since November, Wang said in a speech today at the eComm mobile tech conference in Burlingame, Calif.

There are more than 25,000 iPhone apps now, according to Mobclix. But Ocarina is memorable. The app seems to work like magic, but Smule’s software analyzes the noise coming in via the microphone. The software can recognize changes in the force of the blowing, and the user can control the sounds by holding the iPhone up or down and tapping on virtual flute valves on the touch-screen display.

It’s not so much the revenue that’s impressive, but the passion of the fans and where the creators want to take them. YouTube is chock full of Ocarina enthusiasts playing songs like Stairway to Heaven, Amazing Grace and the theme from the video game The Legend of Zelda. These fans are all answering Wang’s question: “What does it mean to be a Smulean?” 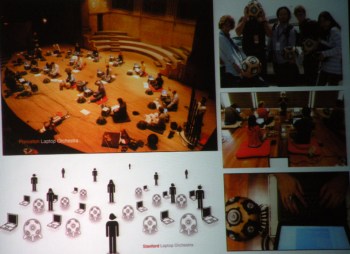 Smule, a nickname for SonicMule, is dedicated to making electronic music applications that allow people express themselves in new ways. It was born out of Wang’s Center for Computer Research in Music and Acoustics at Stanford. He is also co-director of the Stanford Mobile Phone Orchestra, or MoPhO, and the Stanford Laptop Orchestra, which uses everything from iPhones to game joysticks to produce electronic music.

The 31-year-old Wang, who serves as Smule’s chief technology officer, and his partner Jeff Smith, the chief executive, now lead 15 employees, 10 of them full-time, who are making new applications for Smule. The ocarina app, which mimics the 12,000-year-old flute, has spread around the world, with some videos of Ocarina performances being viewed millions of times on YouTube. The company also sponsored the This Contest Blows event, which gave away $15,000 to the best players — including a guy who created a song by farting into his iPhone. 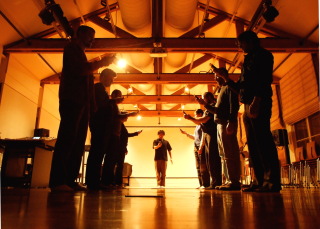 Among my favorites is a girl who played Music of the Night from The Phantom of the Opera quite capably by blowing into the iPhone with her nose. Wang joked that they sent her $1,000 and a box of Kleenex.

Wang believes in making applications that unlock the creativity of the masses. Most of the people who have downloaded the app aren’t musicians — they just needed a little nudge to embrace a new form of musical expression.

Ocarina fans can even share their songs live. The Smule web site provides print-out instructions on how to play songs. More than 1,200 user-created scores have already been uploaded, and various snippets have been listened to more than 40 million times. Smule tracks Ocarina activity on its own blog.

It will be interesting to watch Ocarina’s sales trajectory. It shot to No. 1 in four days in November and held that position in the U.S. and 20 other countries for three weeks. That’s what happens when you launch the right app at the right time on the right platform. You get a real community that becomes viral. But will Smule be able to bottle that magic?

The Ocarina app is just one of five that Smule has created. Others include a virtual firecracker and a virtual cigarette lighter. The company recently raised $3.9 million from Granite Ventures, on top of an earlier $1.7 million round from Bessemer Venture Partners and Maples Investments.

What else is in the works? “We’d like to dive deeper on what it means to be Smulean,” Wang said. Whatever he does, he has to hang on to fans like the one below, playing Oh Shenandoah.