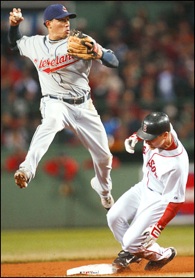 Baseball, while still America’s past time, is no longer its most popular sport. (That would be NFL football.) So it makes sense that the keepers of the game attempt to branch out as fully as possible to lure in new fans and inspire excitement in young people about playing the game again. As such, Major League Baseball (MLB) and ESPN have reached an agreement to put the game on multiple digital platforms, according to USA Today.

This move will allow for baseball games to show up on services like Xbox Live, which uses the Xbox 360 gaming console to get content from over the Internet to your television, and be placed on device such as the iPod. Why the MLB would need ESPN to do this is unclear, but the cable television network has a stranglehold on most things sports, so I’m sure it gave baseball a sweet deal. (Terms were not disclosed.)

ESPN previously had a lesser digital rights deal with MLB, but opted out back in December, paidContent notes. The MLB also had troubles earlier this year with live video casts of its games on MLB.TV, so perhaps that plays into this equation.

As part of the deal, ESPN will also get to put MLB games on its ESPN360.com site, as well as its ESPN Mobile TV channel. Perhaps most importantly though, it retains the rights for all Sunday Night Baseball, Monday Night Baseball and Wednesday Night Baseball shows on the main ESPN television channel. Also, in a first, certain games will be streamed over the Internet live.

I’m a huge sports fan, but I personally cannot stand the amount of advertisements on ESPN.com’s main web site. Here’s to hoping that ad-laden experience doesn’t translate to all of these new platforms — but I have a feeling it will.