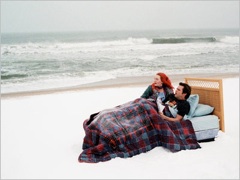 What is the deal with Michel Gondry and Microsoft? Apparently, he’ll be one of the directors at the helm the new Microsoft/Jerry Seinfeld advertisements, Computerworld is reporting.

The French director popular for films such as Be Kind Rewind, The Science of Sleep and Eternal Sunshine of the Spotless Mind has been spotted shooting scenes in Brooklyn, New York for the ads. Ad Age reported back in July that Gondry was working with Microsoft in some capacity, but it wasn’t clear if it would be on the Seinfeld ads. Also odd was that another big time director, Michael Bay (Armageddon, Transformers, Pearl Harbor), was spotted on the set, apparently part of the ad.

The initial thought might be that this will be some kind of lame ad in which Bay is directing the decidedly un-action hero-like Seinfeld. But that seems too obvious. Gondry is known for a quirky style that is hardly conventional, so I’d expect something much less straightforward.

The Seinfeld ads are a part of Microsoft’s new $300 million advertising campaign aimed to recast the company in a cooler light. Microsoft has been the butt of Apple’s ‘Mac vs. PC’ joke ads for a while now and public perception of the company needs revamping. Seinfeld is rumored to be getting $10 million for his role in the ads, which is roughly the amount of money a well-known actor might get for a feature film role. Bringing Gondry on-board definitely increases the cool factor.

Microsoft’s new hip ad agency Crispin Porter & Bogusky are the ones behind the new ads.