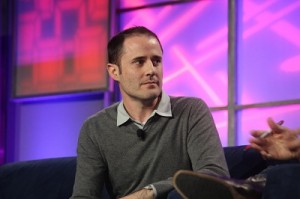 Business Insider ran a long story today about “the real history of Twitter,” suggesting that the company’s official story doesn’t match up with how it was actually founded. Now Twitter co-founder Ev Williams (pictured) has posted a brief comment about the story — on Twitter, naturally.

One of the big players in the article is Noah Glass, who’s rarely mentioned in accounts of Twitter’s history. Not only did Glass found Odeo, the podcasting startup where Twitter was born, but he was reportedly a champion of the project after it was invented by Jack Dorsey, he led its early development within Odeo, and he also came up with the Twitter name.

But then he was pushed out of the company, and tends to be left out in company histories that focus on Williams, Dorsey, and Biz Stone. (One exception was Dorsey’s recent series of tweets about the company’s history, where Dorsey said Glass “came up with the name and managed” the project.)

A Twitter spokesperson declined to comment on the story, but Williams (who, while still on the company’s board, seems to be less active now and says he’s working on a new project) tweeted: “It’s true that @Noah never got enough credit for his early role at Twitter. Also, he came up with the name, which was brilliant.”

Not surprisingly, Williams didn’t comment on some of the more serious suggestions in the story, namely that he fired Glass because he wanted to run the company himself (it has been widely reported that Williams and the board of directors pushed out Dorsey in favor of Williams as CEO in 2008, though Dorsey recently returned to lead the company’s product development), and that he may have downplayed Twitter’s potential when he bought out Odeo’s investors.

The story may bring Facebook’s early history to mind, which is filled with disputes. (For example, Eduardo Saverin had to fight to be re-listed on the company’s website as a co-founder, and the Winklevoss twins have been engaged in a long legal dispute with Facebook over whether founder Mark Zuckerberg stole their idea.) However, it seems like Glass has already come to some sort of resolution with Twitter. In an interview, he said:

I didn’t walk away with anything initially. At a later time I received a certain amount of equity in Twitter. Am I okay? I don’t really want to comment on whether I’m okay or how well I did.