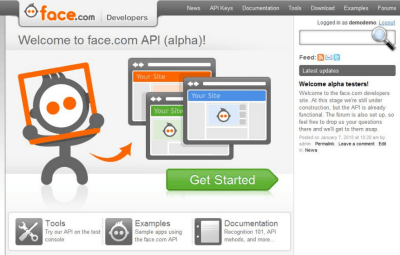 Face.com has scanned more than 7 billion photos in the past year, indexing more than 52 million faces with its Photo Finder and Photo tagger apps on Facebook. Now it is expanding beyond the social network by launching a developer tool that will let you embed the face recognition technology in any site.

Tel Aviv, Israel-based Face.com has created face-recognition software that has proven to be a big time saver for those who want to keep up with photos posted of themselves or their friends on Facebook. Photo Finder lets you discover photos of yourself or your friends that are untagged (or not yet identified with a name). And Photo Tagger lets you collect faces into an album of photos that you can tag. Both are in public beta testing now.

This kind of tool is popular because of the volume of photos being uploaded to Facebook, which has become the largest photo-sharing site in the world, with nearly 2 billion photos per month. The company says the face recognition is accurate enough to identify faces in sub-optimal circumstances, such as poor lighting, poor focus, subjects wearing eyeglasses, facial hair and even Halloween costumes.

It may sound creepy on the privacy front, but Face.com says it uses the same privacy protection rules that Facebook does in its terms of service. With the new open application programming interface, developers will be able to use Face.com’s technology to create their own original apps that leverage face recognition, algorithms and its database of tagged faces. A few examples of developers using it already are Celeb-Finder, Tagger Widget, and PosterYourself.

The company was founded in 2009 by Gil Hirsch. It has eight employees and has raised an undisclosed amount of money from Rhodium. Rivals include Apple’s iPhoto software, Google’s Picasa, and Polar Rose.