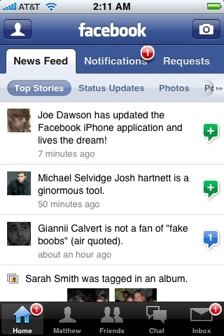 As promised, Facebook has rolled out a new, more robust iPhone application. Version 2.0 brings many of the features that are found on the regular Internet-based version of the social network, but had been lacking in the first few iPhone iterations.

Included in the update are: Notifications, the full News Feed, people search, friend requests, photo tagging, photo captioning, full Mini-Feeds, inbox search and message attachments. The update also promises to be more stable and run faster even with a large number of friends.

The application description states: “This is now the best way to use Facebook on your iPhone.” That’s important because the native app really hasn’t been the best way to use Facebook on the iPhone thus far. What worked better was the brilliant web-based version Facebook made and optimized for the iPhone before the device could accept third party applications. The fact that you couldn’t use the newer app to do something like accept friend requests was ridiculous. Now you finally can.

I’m using version 2.0 of the app right now; it’s really quite beautiful. The first thing you’ll notice is that it has gained a lot of color. Aside from the traditional Facebook blue and white, the button to comment on feed items is now a green dialog box with a plus sign in it. New messages and notifications are clearly noted with red circles with the number of requests inside.

But it’s the little things that may make this app great. Tapping areas in which you would type something, such as the green comment boxes, zoom out a large comment box. It’s a small thing that most people may not care about, but that attention to detail make this app look and feel almost like Apple itself designed it. The same is true with the secondary bar on the New Feed tab. You can scroll it from side to side with your finger — and if you flick it, it keeps scrolling, showing your the various options.

The area from which you update your status are now higher up and are always displayed along the top of the main home area, as is the button to take or upload a picture. It has seemed pretty clear since the first version of the app that Facebook wants more people to use the service to update their status, and at least among my friends, it looks like they certainly are. 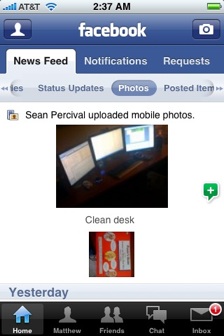 The first version of the iPhone application was more like a communication tool than a mobile Facebook. This new version is regular Facebook, but is arguably even better with its sexy user interface and the fact that it’s mobile. Certainly some users who are upset with Facebook recent Internet-version redesign may like this more — it’s less confusing.

So what’s next for the iPhone Facebook app? My guess would be some sort of location functionality. Services like Loopt, Whrrl and Where are getting better at figuring out how to make location-based networks be compelling within an iPhone app, but the giant elephant in the room that no one wants to talk about is the likelihood that the much larger social networks like MySpace and Facebook will soon get into the location game themselves.

As I’ve talked about before, the key to location-based services taking off is having friends (as in people you actually know) use them. Loopt’s most recent update with Loopt Mix which allows you to find other users near you who wish to share their information was an important first step — but most people still aren’t going to reach out to strangers around them. They will reach out to friends around them however. And Facebook is all about friends.