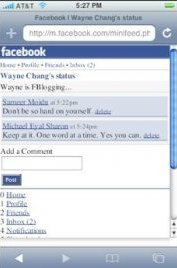 Since Facebook started letting users comment on friends status updates on its mobile site yesterday, it says more than one million users have made these Twitter-like replies in the last 24 hours.

In the minds of Twitter users, this commenting feature likely seems most analogous to the “@friend” feature of Twitter, where you can designate a message to one friend and have all of your friends see it. Certainly, Facebook’s commenting-on-statuses feature encourages the same sort of group commenting.

But to most of Facebook’s users around the world, this new reply feature is also a way to save them money on sending group text messages. Instead of paying a carrier to send texts back and forth, they can just log on to the Facebook mobile site and do it for free. It looks to me like another nail in mobile text messaging’s coffin.

Of course, this is also yet another indication that Facebook is going to keep competing, obliquely, against Twitter, instead of doing something silly like buying it.