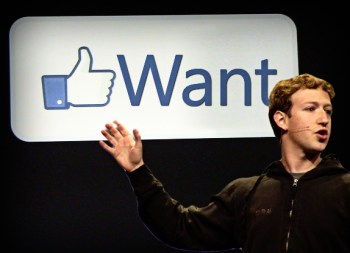 It’s the worst-kept secret on the Internet: Facebook Actions, a new way of interacting with apps, content, and brands, are coming to the social network.

At a private event in San Francisco Wednesday night, the social network announced a slew of new partners are using Actions, the Facebook feature that will let developers make just about any verb a semantically cross-indexed link.

What does all that mean? Let’s take a simple example as an illustration.

Let’s suppose you just bought a Juicy Couture velour tracksuit. In days of yore, you might have hopped onto Facebook and told all your friends in a status update, “I am now the proud owner of a Juicy Couture tracksuit! It’s so blingy; I love it.”

In the new world of Facebook Actions, you would simply click an “Own” button next to the tracksuit you bought on a Facebook partner site. On related parts of your Facebook profile, the app you used to show you “own” the tracksuit would add that item to a list featuring other purchases you’ve made. Other Facebook-linked apps you use might show other lists — for example, clothes you’ve worn, products you want, books you’ve read, movies you’ve reviewed — anything you’ve talked about on the network or on Facebook-connected sites around the web.

Actions are kind of the Holy Grail of semantic data, defining relation types between people, objects, content, places, businesses, and so much more. If users warm to the idea of Actions, it might also be one of the most valuable and lucrative move Facebook will ever make.

All your apps, all your stories, all on Facebook 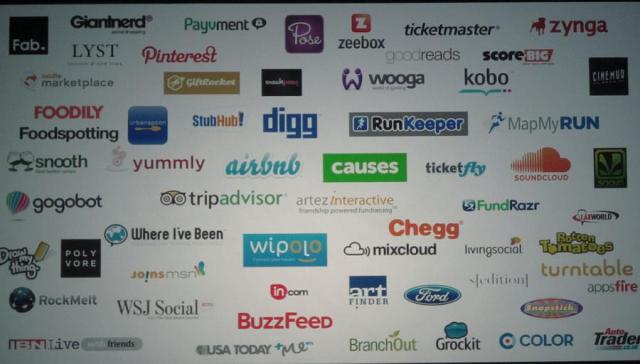 More than 60 partners are working with Facebook to create and roll out Actions for this initial launch. These partners are in verticals from food to fitness to travel and beyond. Companies such as Pinterest, Airbnb, Pose, RottenTomatoes, Runkeeper, and Foodspotting will be among the initial partners.

If you’re interested, you can start adding apps right now. Facebook has a video at that link explaining how the apps will interact with your Timeline.

And starting today, any application that wants to integrate with Facebook Actions and Timelines will be approved in the coming weeks and months.

Ideally, said Facebook exec Carl Sjogreen at tonight’s event, any app you find meaningful will be able to connect to Facebook in a way that’s more meaningful than just clicking a “Like” button or automating shares from that app to your Facebook wall — and that all your stories will be told, not through a universe of apps, but universally on Facebook and with a structured context.

All activities from a given app will be summed up at the end of the month — for example, your “wanted” and “spotted” items on Foodspotting would appear in a visual graph together on each month in your Timeline.

“The call to developers is to start your engines,” Sjogreen concluded. “We’re excited to see what you’re going to build.” 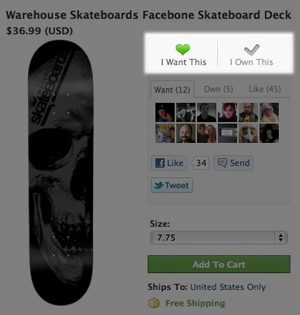 We recently spoke with Payvment CEO Christian Taylor, who told us Actions have the potential to be far more important than the already ubiquitous “Like” button.

As one of the leading enablers of “f-commerce,” or retail and commerce occurring on and around Facebook, Payvment has been using “Want” and “Own” buttons linked to the Facebook social graph. In the image on the left, you can see Payvment’s buttons in action.

“The Open Graph has been around for two years, but it was really based on the Like button, which never really worked,” said Taylor. “It really doesn’t mean anything to anybody.”

Actions, he continued to say, would help to bring even more opportunities to learn about content and products to Facebook users. “These new buttons are really going to drive discovery, just like Spotify did with music.”

At Facebook’s f8 developer conference last year, when Actions were first revealed, even Facebook CEO Mark Zuckerberg admitted that “Like” buttons were limited.

“We’re helping to define a new language for how people connect,” Zukcerberg said at that time. “When we started, the vocabulary was limited” to simple, inexpressive “Likes.”

So starting now, instead of “liking” a book, you can tell friends you “Read” it through Facebook’s new vocabulary of Actions. But you’re not just telling your friends; you’re telling Facebook and Facebook’s vast network of advertisers and brands.

The more businesses large and small are able to understand the relationships between us consumers and the products we consume (and the sentiments we express around those interactions and relationships), the more targeted and effective they can make their marketing. It’s only as insidious as capitalism itself, and this type of intelligence is the kind of thing that could quickly bring online advertising to its evolutionary apex — at least for now.

“The company will collect more data than ever, if you allow it, and it will offer you enticements to share that data,” wrote VentureBeat’s Dean Takahashi in an op-ed back when Actions was first previewed.

“[Facebook] can, for instance, take your information and mine it for useful nuggets. It can give you back statistical information about your behavior that you didn’t know about… If there was any doubt that Facebook is a data mining company with a lot of ‘big data,’ that ended today.”

The Ticker on the Facebook homepage. Actions will appear here. Rolling over Ticker activity will trigger a flyout with more information and interactions.

However, from the user’s perspective, one of the best parts about Actions is that you can use them without incessantly oversharing to your friends.

When you share a post or update your status on Facebook, it will appear in your friends’ news feeds. But when you have an Action coming from the Open Graph (i.e., from a site that exists outside Facebook but that uses Facebook Connect in some way), that activity will only appear in the Ticker and on your own Timeline.

(The Ticker is a lightweight, real-time stream of activity that shows up on the right side of the Facebook homepage. It showcases various minutiae from your friends, from Actions to songs they’re listening to and beyond.)

Many Actions partners will offer granular settings to give you control over what you share. For example, design-centric flash-sale site Fab.com’s “Bought” actions are opt-in. Like the Actions turned on but don’t want to share a particular purchase with your friends? Mark it as a gift to hide it. Don’t worry about embarrassing buys; all Fab.com “adult” items are hidden by default.

“You may not want your mom to know you just bought a sexy piece of lingerie, but you can change that,” said a Fab.com spokesperson. “We want to make sure our customers are as comfortable as possible with sharing.”

For Actions coming into Facebook from outside apps, users won’t get prompts for each Action they take; those blips on the radar will simply appear on the Ticker then vanish — mostly. Since this real-time stream generates a lot of noise with very little signal, the Actions will also be archived on users’ Facebook profiles, where deeper digging will unearth various kinds of actions he or she has taken in the past.

Facebook’s redesign of profile pages in to Timelines has made this separation of high-level and low-level information possible and easy to navigate.

“We had to figure out the interactions that people wanted to have, the social construction,” said Facebook design chief Sam Lessin in a recent interview with VentureBeat about the Timeline design.

“It’s designed very differently from News Feed,” he continued, noting that while the elements of the Timeline you can see now are very much related to what’s going on in your life day by day and month by month, other sections of the profile are tailor-made for deeper digging.

As Facebook executive Bret Taylor explained it, with the addition of Actions to Facebook profiles, “You can see everything you have ever done in any app.”