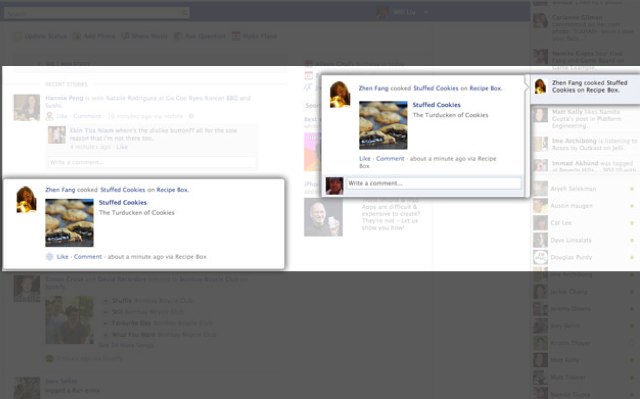 Facebook’s ambitious plan to weave various actions we take across the web into the social network via “frictionless” sharing is finally ready to be deployed, VentureBeat has learned.

The remaining pieces of Facebook’s new Open Graph are in the final stages of testing and are nearing release, a source familiar with the matter told VentureBeat. The social networking company is quickly working to validate partners and could turn on the latest element, Facebook Actions, any day now or, at the most, in a few weeks, the source said.

The new Open Graph, unveiled at Facebook’s f8 developer conference in September, consists of three key elements: Timeline, Ticker and Actions. The first two pieces have been successfully deployed — although they both were met with some user resistance. Now, it’s time for the world to be introduced to a whole new type of social sharing with Actions. (Facebook told developers to expect the first Action approvals in January.)

“We’re currently focused on the rollout of Timeline, which already features several apps in the news, music and video categories. In the coming weeks, Timeline apps will launch in more categories, including fitness, sports, food, and travel,” a Facebook spokesperson told VentureBeat when asked about the deployment.

What are Actions, exactly? You already know what they are — you’ve been using them for months. Facebook previewed the new Open Graph capabilities with its own “Read,” “Listen” and “Watch” Actions (that’s why you’re always in the known when a Facebook friend listens to tracks on Spotify or reads an article from the Washington Post Social Reader). Facebook calls this kind of sharing frictionless because the actions are automatically posted to your Ticker or Timeline.

You can think of them as the new “Like” button, but Actions are instead used to document the behaviors you take elsewhere on the web. Actions are created and defined by third-party developers, and soon you’ll start to see them everywhere: in Ticker, News Feed and Timeline on Facebook, and in the applications or on the sites you’ve already come to love.

A cooking site, for instance, could create the “Cooked” action and associate that action with its collection of recipes. You’d then be able to click a button to indicate that you’ve cooked something and automatically share that update to Ticker. You’d also be able to add that same cooking application as a box to your Timeline, and in so doing show off all the recipes you’ve made in a small container on your Timeline.

Just how big of a deal is this? Facebook itself calls Actions (and their associated Objects) “the building blocks of Open Graph.”