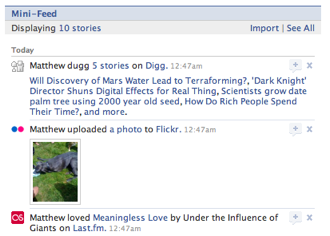 Facebook is a service that allows you to import data from different social services around the Internet and have conversations about them. Oh wait, did I say Facebook? I meant FriendFeed.

You see, it’s confusing because later today Facebook is rolling out the exact same functionality to its Mini-Feed. Something which we foresaw last month after Facebook tripled the number of services from which you could import data.

Facebook has a history of mimicking the functionality of hot services around the web. Your status updates weren’t always there, you used to have to go to Twitter to do that. Then Facebook rolled out that functionality in a way that looked eerily similar to Twitter in some regards.

When Facebook first announced it was importing third party data into its Mini-Feed, we noted that you couldn’t really compare the services directly with FriendFeed yet because Facebook was simply aggregating the data and not allowing you to do anything with it. Now it is and now you can (compare them).

Facebook is also a huge social network where you can do many thing. Importing data is just a small part. However a comment made during the Facebook profile redesign preview event last month at Facebook made it clear that more of an emphasis would be placed on importing other sites’ social data going forward. 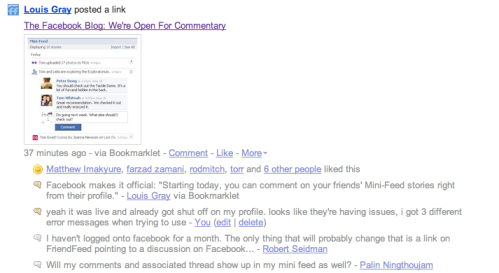 It will be interesting however to see how much people on Facebook use this functionality. After all, it seems like users only started using the status updates once Facebook moved it to the prominent position right next to arguably its most important profile area — your face.

But given the popularity of writing on individual’s Walls on Facebook, perhaps writing in their Mini-Feed will be the next big thing. Just as with FriendFeed, you will now have something to talk about.

“We aim to help users share information and communicate more easily, which sometimes entails having a conversation around a piece of content or an action.”

update: Some folks are already seeing the Mini-Feed comments enabled. As commenter Jaffer wrote below quoting a friend upon seeing this functionality:

That echoes the sentiment many users first had upon seeing the Mini-Feed itself after it launched. Now it’s a feature that is so successful, it has been copied by nearly every other social network. 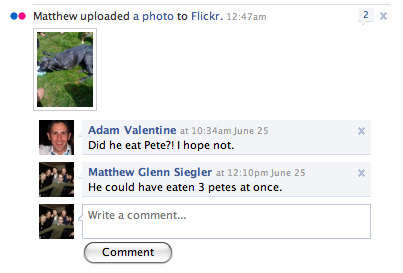 update 2: I briefly saw the commenting functionality as well, it’s a little ‘plus’ box in the upper right of your feed items. I tried to use it and got a message stating I didn’t have permission to comment on my own items — now it’s turned off again. Oh the joy of Facebook roll-outs.