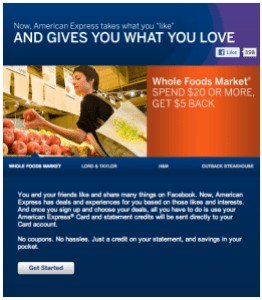 American Express on Tuesday announced it had partnered with Facebook to give deals at high-profile outlets and small businesses.

The initiative is similar to the partnership AmEx announced with Foursquare about a month ago. The AmEx partnerships with Facebook and Foursquare are different from daily deals services like Groupon and LivingSocial because they do not require a purchase through another service to get a deal. AmEx card holders just go to a participating outlet and use their American Express cards to pay and automatically get a discount.

“Through this platform, we are driving relevant value that is targeted and meaningful to our cardmembers,” Leslie Berland, Vice President of Social Media Strategy for AmEx, told VentureBeat via e-mail. “We believe it will bring cardmember engagement, sharing of deals with friends, and foot traffic to our merchants.”

The service’s launch partners are fairly high-profile and include the likes of H&M, Sports Authority, Whole Foods, Dunkin’ Donuts and Outback Steakhouse. The deals are not the same as Facebook Deals, which Facebook handles alone.

American Express has a slight advantage over Groupon, LivingSocial, and other daily deals services in this area because the process of getting a deal is easier. Users don’t have to print out a coupon, present an app on their smartphone, or use a randomized code on website. After signing up, it’s as simple as handing over a credit card you’d already use to pay and getting a statement credit.

That said, to use Groupon and LivingSocial you can use whatever debit or credit card you want. But each model is different and the idea of offering exclusive good deals to AmEx card holders adds another incentive for prospective users to sign up for a card. It also rewards those who already have AmEx cards in hopes of keeping them from going elsewhere.

What do you think of this new partnership? Are you signing up for new deals through AmEx?