Screenshots surfaced Thursday afternoon suggest that Facebook, in attempt to make its Open Graph platform more of a boon to application developers, is actively experimenting with a potentially more engaging format for app stories posted to members’ New Feeds.

The screenshots, first uncovered by Inside Facebook, reveal a striking News Feed layout that features a user’s third-party app content in large boxed containers that allow for likes, comments, and other actions on each item. 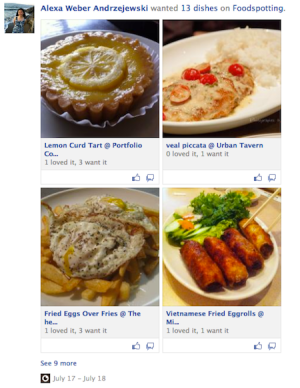 The layout, pictured right, seems to provide ample and extra News Feed real estate to content shared from third-party applications, and even encourages viewers to engage with the auto-posted stories.

“We’re always testing new Platform features, but we have nothing further to announce,” a Facebook spokesperson told VentureBeat.

Facebook’s Open Graph platform has been the gift that keeps on giving to many a developer. The platform helps app makers reach more people through app-to-Facebook integrations, and story placement in users’ News Feeds, Timelines, and Tickers. It has even been credited with the success of video apps such as SocialCam, just acquired by Autodesk, and Viddy.

The social network recently spotlighted the growth of camera applications such as Cinemagram, Hipstamatic, and Instagram, a Facebook property in waiting. “On both iOS and Android, Instagram also launched built-in Like action at the end of June and now one-third of all of its Open Graph actions are Likes, boosting mobile referral traffic 10%,” the company said.

The alterations were seeing today are likely meant to test whether Facebook can bump the traffic it sends to its application developers even higher with a fresh design.