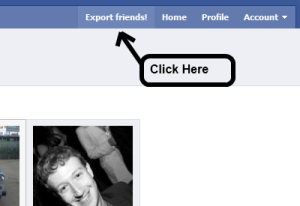 Facebook has blocked a popular extension for Google’s Chrome web browser that allows users to export their Facebook contacts.

The open-source extension, Facebook Friend Exporter, lets users grab all the information about their Facebook friends, which can then be imported to other networks such as Google’s new social service, Google+.

Get your data contact out of Facebook, whether they want you to or not. You gave them your friends and allowed them to store that data, and you have right to take it back out! Facebook doesn’t own my friends…

Mansour also notes that Facebook is blocking his extension and is pledging to build a new version that continues allowing users to download their information.

“Facebook is trying so hard to not allow you to export your friends. They started to remove emails of your friends from your profile by today July 5th 2011. It will no longer work for many people,” Mansour writes. “A new version with a different design is currently deploying. You might have to do exports daily. It uses a different approach, and I will maintain this version. Just bear with me.”

It’s worth noting that the extension has been allowed to exist for quite a while. The first version was released in November 2010, but it’s only recently gained in popularity — picking up more than 17,000 users so far.

It’s interesting that Facebook has taken steps to block such contact exporting efforts just as Google+ is making a name for itself. Clearly, Facebook doesn’t like that Google+ beta users are looking for ways to port over all their Facebook friends to Google+.

But while Facebook might be scared of Google+’s rising popularity, it’s unlikely that the demise of the world’s largest social network will come any time soon. Facebook has an estimated 750,000 active monthly users and a large third-party developer community.