Facebook has brought payments to WhatsApp for the first time, starting in Brazil. The new feature is powered by Facebook Pay, a unified payment service first introduced back in 2018. The company said at the time that it planned to enable the service across its suite of apps, including WhatsApp and Instagram.

News emerged earlier this year that WhatsApp payments were going to launch first in India, after gaining approval from local regulators, but it has remained in private beta since then. The Brazil launch marks the first full countrywide launch for payments in WhatsApp and signals a new way for Facebook to monetize the messaging app, after having struggled to do so since acquiring it for around $19 billion back in 2014.

Facebook Pay is currently available in about 40 countries around the world, though it’s limited to the main Facebook app in most markets. The only exceptions to this are in the U.S., where it’s also available through Facebook’s Messenger app, and now Brazil, where it’s also available in WhatsApp. A WhatsApp spokesperson confirmed that the payments feature will arrive in more countries in the future, though they didn’t divulge when or where the rollout may head next.

From today, anyone in Brazil can use WhatsApp to buy goods from local businesses or send money to friends and family without leaving the app — with support for debit or credit cards. Support is initially limited to Banco do Brasil, Nubank, and Sicredi on both the Mastercard and Visa payment networks. 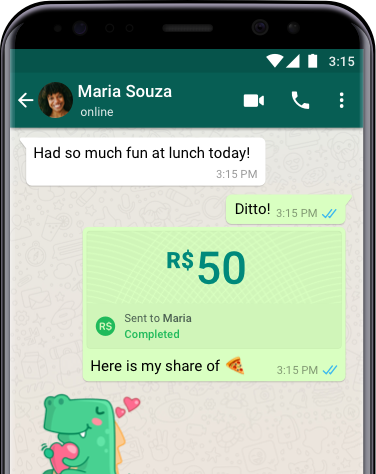 In terms of security, WhatsApp said card details are encrypted per the PCI standard and users are required to use either a Facebook Pay PIN or fingerprint to authorize each payment.

With some 2 billion users, WhatsApp is among the world’s most popular social networking apps. But Facebook has only recently made inroads into monetizing its multibillion-dollar acquisition with the launch of a dedicated WhatsApp Business app, with larger businesses paying to access its API. Facebook is also reportedly working to bring some form of advertising to the messaging app, though the exact details of this are not yet clear. Expanding into payments opens the door for Facebook to monetize transactions by charging businesses processing fees. A spokesperson has confirmed that the company charges a 3.99% fee per transaction, which includes payment processing, chargeback protection, and merchant support.

This is also a natural extension of business catalogs, a feature WhatsApp introduced last year that lets merchants share products inside customer conversations. Catalogs show users product photos, prices, descriptions, and a link to make the purchase — so payments were the final piece of the puzzle.

It’s also worth noting that merchants looking to use Facebook Pay through WhatsApp will have to create a WhatsApp Business account.