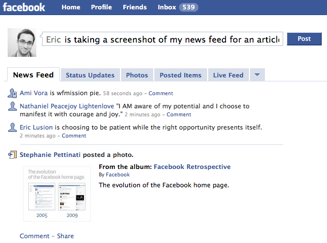 Five years ago tomorrow, Mark Zuckerberg launched a site out of his Harvard dorm called thefacebook.com. It was an immediate hit, despite competition from established social networks, because it offered a safe place for students to share things like party photos with just their real friends. So it’s hardly a birthday surprise that photo uploads — and a range of other methods for sharing personal information on the site — continue to gain popularity today, as can be seen from some new statistics just released by the company.

In fact, information-sharing features like photos seem to be gaining popularity with Facebook users faster than Facebook itself is gaining new users — a sign that the sharing-focused redesign implemented last year continues to take hold on, and also a good sign for the company’s revenue-making efforts. Here’s the breakdown.

Facebook said it had 140 million monthly active users as of mid-December (when we last saw new numbers). The company hasn’t updated that number since, but a recent third-party analysis by the blog AllFacebook guessed that the site hit 160 million users by this past Sunday, based on raw data available on Facebook’s advertising service. That’s a fourteen percent increase in new users in roughly a month and a half.

Meanwhile, Facebook users are now sharing more than 850 million photos per month, up 21 percent from 700 million in mid-December. Facebook was pronounced the largest photo-sharing web application in the world by web measurement company comScore in January of 2008, so presumably this ongoing growth is helping it maintain that title.

Facebook is also seeing a surge in status updates — the Twitter-like feature that Facebook launched shortly after Twitter, back in the spring of 2006. Now, more than 15 million users are updating their statuses at least once a day, whereas 13 million were back in mid-December — a 15 percent increase. It’s hard to know exactly how big Twitter is because that company doesn’t release traffic data, and much of the activity comes through the use of its application programming interface (API), but we’re guessing there are somewhere less than 15 million Twitter users tweeting at least once per day

This isn’t just personal information that’s being shared. Now, 24 million other “pieces of content” (links to online news article, Facebook notes, etc.) are being shared per month, up 60 percent from 15 million in mid-December.

Why are people sharing more? The redesign emphasized features like status updates and photos, and that certainly seems to have contributed to it. But the average Facebook user now has more than 120 friends whereas the average user only had 100 friends in mid-December, a 20 percent increase. More friends likely means more friends to share things like photos, news articles and your status with. Facebook more than doubled from 60 million monthly active users in January of 2008. As new users gradually gain more friends on the site, they seem to be deciding to share more.

This is also good for Facebook’s revenue plans. The company is trying to build “engagement” ads around sharing behaviors; in the news feeds showing you your friends activity, for example, Facebook also shows you ads and links to brands — and to brand fan “Pages.” You might see an ad for a movie then become a fan on its Page, then the action will appear in your friends’ news feeds. The more people post photos and status updates and whatnot, the more material Facebook has to show you in your news feed — and the more you’ll want to read your news feed every day. This may be why more than 3.5 million users are now becoming fans of at least one Page every day, up 40 percent from 2.5 million in mid-December.