Want to tell all your Facebook friends that you’re voting this year? CNN and the social network want to make that easy for you with the “I’m Voting” Facebook app. 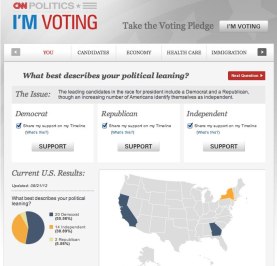 “I’m Voting” taps into Facebook’s Open Graph, enabling users to broadcast to their Facebook friends what political matters they care about and for whom they plan on voting. Users can then compare their responses to those of their friends.

CNN plans to use all of this data as a sort of “second screen” for its news segments. With the Facebook user base, the network will be able to offer poll questions and get well-sampled responses relatively quickly.

While user participation in the app is low so far, some numbers have already come in: 46 percent of participating users have declared themselves  as Democrats, while 28 percent say they are Republicans. Sixty-one percent of users said they will vote for President Barack Obama during the upcoming election, compared to 30 percent who plan to vote for presumptive GOP nominee Mitt Romney.