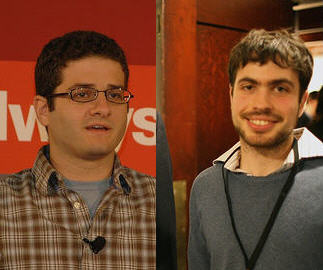 Facebook co-founder Dustin Moskovitz (left) and colleague Justin Rosenstein (right) said this weekend they are leaving Facebook to start their own company.

The moves are just the latest in a steady exodus from Facebook, a trend that has sparked questions about whether the popular social networking company’s culture is changing and whether it is losing its magnetism.

The new company will build tools to facilitate collaboration within the enterprise, according to the duo. Inspired by the challenges the two had at Facebook as the company grew, the project will use Facebook Connect as its user authentication system. They are both at Facebook for another month, and haven’t actually started the company yet, Moskovitz said in an email. Moskovitz gave us permission to quote his and Rosenstein’s notes below.

But first, just a year and a half ago, Rosenstein was writing how special Facebook was. Given his words at the time, you’ve got to wonder whether anything at Facebook changed that made him move on:

I am writing this note to spread Good News to all the friends I haven’t already overwhelmed with my enthusiasm: Facebook really is That company. Which company? That one. That company that shows up once in a very long while — the Google of yesterday, the Microsoft of long ago. That company where large numbers of stunningly-brilliant people congregate and feed off each other’s genius. That company that’s doing with 60 engineers what teams of 600 can’t pull off. That company that’s on the cusp of Changing The World, that’s still small enough where each employee has a huge impact on the organization, where you think about working now and again, and where you know you’ll kick yourself in three years if you don’t jump on the bandwagon now…

That was then, this is now:

…I’m really happy I took the job. I’m thrilled with the time I’ve had at the company, and with the incredible peers I’ve gotten to know and work with. But something else exciting happened in the year and a half since I joined Facebook. I started spending a lot of time after work talking to Dustin. Efficiency-through-software was dear to his heart as well, and we would stay up til 3am raving about how shortcut keys and high-level abstractions would Change The World. We shared a passion for technology, for entrepreneurship, and for using them to solve the same set of problems.

As our visions for how productivity software could work came into alignment, we thought about building it inside of Facebook. It was an attractive option in many ways, and neither of us was eager to exit a company that was in such an exciting phase of its development. But at some point it became clear that doing so wouldn’t be good for Facebook or for us. Facebook needs to continue its mission of making the world more open through social software, without distraction, and the new project requires a company built around it from the ground up, with the goals of efficiency and group collaboration embedded deeply into its DNA from day 1.So we’ve decided to leave Facebook (in about a month) and start a new company, to build an extensible enterprise productivity suite, along with a high-level open-source software development toolkit, built for the Web from the ground up.

We see this new venture as very complimentary to Facebook. We hope our products will become to your work life what Facebook.com is to your social life. Our software will use Facebook Connect as the default option for identity and authentication. Our user interface will adopt many of Facebook’s conventions, creating a seamless and familiar experience for current Facebook users. And if our new development tools turn out to be useful, we hope the Facebook engineering team will come to adopt them.

Leaving Facebook makes me sad, but I feel I have to follow my passion on this. I can’t say enough about Facebook and the friends I’ve made here, and I am enormously excited for the company’s further success, a destiny I’m confident it will reach regardless of my participation in it. Finally, I’m really grateful to Mark, Chris Cox, Sheryl, Yishan, Chamath, Elliot, and others, who’ve been helping us make this a smooth transition, and to my family for guidance and support. Thank you; it’s meant a lot to me.

And here’s the email from Moskovitz:

At various times in our progress, people have come up to me to deliver a now familiar question: “did you ever imagine Facebook would be this big?” And I give a familiar answer: “well… yea, actually”. Frankly, Mark and I knew even at the beginning this was something the world needed. We went into the college market as a stepping stone – identifying dense nests in the graph that would lead us to the rest of the world. We could see far enough in the future to know there would be an impact, we just didn’t know exactly what it would be. Now I can look back on our progress and see the ways the world has changed, the ways we have changed it. We’ve altered the future in a score of ways, from making it easier to look up phone numbers and email addresses to making it more difficult for terrorists to isolate impressionistic youth in the middle east. At the same time we’ve built a competent and vibrant organization, driven by a passion to push the world more open.

In the process of helping to build a company, I found I had another passion: making companies themselves run better. It’s easy to confuse this with a desire to manage, but even when I tried to do that I found myself drawn back to code for the solutions to my problems; I didn’t want to construct efficiencies, I wanted to engineer them. Communication is the key to scale in any size organization and technology is the key to communication. I’ve seen us unblock ourselves time and again with new tools to increase transparency and passive information flow and many times it was the fruit of my own labors. While working on improving Facebook’s tools, however, I came to a very difficult conclusion: doing this for all the companies of the world was not the same project as doing it for one of them. This idea is one that needs an organization that was built to do it, with every fiber of its DNA engineered in a way that producing an extensible enterprise platform becomes little more than the logical consequence of an organism executing its own nature. Further, the things we’ve scoped for Facebook’s product team to do are the right things to be doing and I wouldn’t have agreed with asking the company to divert significant resources to approach a project so different and so boundless in scope. Every time we introduce something new, we do it at an opportunity cost and this is too large a detour to take when we are already moving swiftly in the right direction.

And Facebook is moving in the right direction. When Facebook has a billion members (and 800 employees? maybe 900?) and someone leans over to ask me if I ever imagined it would get that big, my answer is going to be “you’re damn right I did. how come it only has 20% of the market?”. To know that this is Facebook’s future and decide not be a part of it is the hardest thing I’ve ever had to do, but it’s allowed me to have a broader perspective for the future. Like you, I’ve worried about the people leaving the company but it took becoming one of them to understand that this is just another part of the ecosystem (you should just take my word for it though). I’m not leaving the movement – I’m becoming a new part of it. The inevitable flux of the men and women behind these organizations is what moves the industry forward in the same direction in a way that cross-company collaboration alone never will. As the world moves to modular stacks and applications built up from a smorgasbord of platforms instead of single toolkits, then the companies that build the parts will need to act more and more like cooperative teams in a single larger organization. As Justin would undoubtedly say, I am simply viewing the industry from a different level of abstraction. These changes are difficult and sad, and that’s certainly an understatement for me… but change brings new things and this particular change will bring a new ally to our mission – I think we can all be pretty pumped about that.

Whether I work here or not, I’ll forever bleed Facebook blue. Facebook has been my passion and my purpose for the past 5 years. Our new project is not a replacement for what we build here, but instead both a complement and a compliment, and we have every intention of making it feel like a natural extension of Facebook’s product and purpose. Similarly, my timing in leaving is not an indication that I have lost faith in our ability to succeed, but an affirmation in my confidence in the company’s enduring success irrespective of changing faces.

Justin and I going to be around for at least another month and I am really looking forward to going deeper on this idea with everyone and how we can continue to work closely with Facebook. I’ll always be really proud of the work we’ve done and grateful for the opportunity to work with such a uniquely remarkable team. We’ll also be at the Q&A later to help continue the conversation right away.