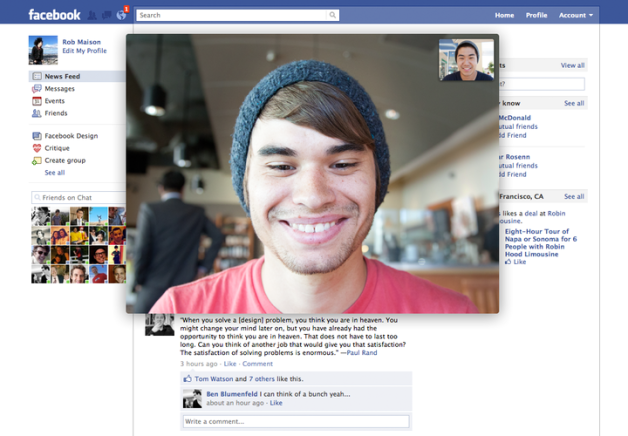 Not surprisingly, Facebook confirmed the addition of Skype-powered video chat today as part of its “awesome announcement.”

The feature, which is launching today, will allow any Facebook member to video chat with their friends with the click of a button. It follows last week’s release of Google’s Hangouts group video chat feature in Google+, although at the moment it looks like Facebook’s video chat is only limited to two chat parties.

“Video chat has been around for years now, but it’s still not an everyday activity for most people,” Facebook’s Philip Su wrote on the company’s blog today. “Sometimes it’s too difficult to set up, or the friends you want to talk to are on different services. So a few months ago, we started working with Skype to bring video calling to Facebook.”

Zuckerberg says that the company spent a lot of time designing the video chat experience so that it wasn’t disruptive. To send a video chat request, you simply need to hit a button on your friend’s profile. When receiving a call, you will see a small notification with an audible ring that you can accept or dismiss easily.

Skype CEO Tony Bates joined Zuckerberg on stage to discuss the new video chat partnership. Bates said that Skype has been working together with Facebook for the past six months on developing the feature. It was a “true partnership” between the companies, he said.

When asked if group video chat capabilities is on the horizon, Zuckerberg said that he “wouldn’t rule anything out.” But he noted that today’s announcement is still significant since it’s immediately available to Facebook’s 750 million users. Google+ Hangouts, on the other hand, is only open to a select few beta testers. (At this point in the announcement, Bates had a very annoyed look on his face at the mere mention of Google+.)

Both Bates and Zuckerberg hinted that mobile video chat is another feature they’re working on, but there was no indication when that would be available. “Not yet,” was all they said.

Zuckerberg noted that Microsoft’s intention to buy Skype gave him a greater sense of stability in the company.