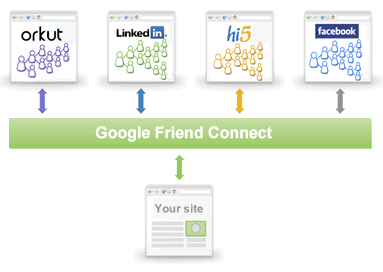 MySpace, then Facebook and then Google all recently launched services for third parties to access their users’ data through other sites.

When Google announced Friend Connect on Monday, I asked the company for clarification on its relationship with Facebook — strangely, Google didn’t offer MySpace data even though those two companies are partners on Open Social. A main point of the announcement, after all, was that Open Social applications could run on other sites, with better access to social networks’ data.

Instead, Google announced that third party developers would be able to access data from Orkut, smaller Open Social member network hi5 and Linked — and Facebook. Google, it seems, wanted to see just how open Facebook’ social network rival was.

For Google’s response to my question, check out this audio clip. As the company tells me in the clip, it has no business relationship with Facebook.

In the past, when we found applications passing user data to another party (for instance, to ad networks for the purpose of targeting), we suspended those applications and worked with those developers to ensure they respect user privacy. Now that Google has launched Friend Connect, we’ve had a chance to evaluate the technology. We’ve found that it redistributes user information from Facebook to other developers without users’ knowledge, which doesn’t respect the privacy standards our users have come to expect and is a violation of our Terms of Service. Just as we’ve been forced to do for other applications that redistribute data in a way users might not expect or understand, we’ve had to suspend Friend Connect’s access to Facebook user information until it comes into compliance. We’ve reached out to Google several times about this issue, and hope to work with them to enable users to share their data exactly when and where they choose.