Facebook has made it easier than it used to be for users to understand what kinds of personal data applications need in order to work. From now on, users will get a single dialog box explaining all of the data a third-party app is requesting before they install it.

Before the change, users would have to go through a sometimes vague two- or three-screen maze of options. The move is part of a concerted effort from the social network to make simpler privacy settings for its roughly 500 million users.

“These improvements reflect two core Facebook beliefs: first, your data belongs to you; second, it should be easy to control what you share,” wrote the company’s chief technology officer, Bret Taylor, in a blog post. “If at any point you ask a developer to remove the data you’ve granted them access to, we require that they delete this information.”

By default, applications only get access a user’s public data. If they need more, they’ll have to explicitly ask for it. 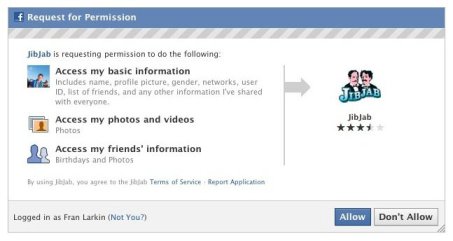 In general, this should be a good thing for user experience. A single dialog box will make it even more seamless and less confusing to install an app.

The downside is also that it will be more seamless and less confusing to install an app. So more users might thoughtlessly install apps, opening themselves up to more privacy risks if there happen to be developers who have poor security practices or are misleading.

Facebook recently changed its policies, giving developers indefinite access to data. While the company asks developers to provide an easy for users to request full deletion of all their personal data, it’s hard for the company to know that the data is gone for sure given the more than 1 million developers the platform supports.

That said, Washington D.C.-based privacy watchdog Center for Democracy and Technology thinks Facebook’s new permissions might actually have the contrary effect. By making it very clear what developers are asking for, they’ll need to think twice before getting too aggressive with requesting user data.