Ahead of its annual F8 developer conference in San Jose, Facebook has offered a glimpse into some of the things it’s cooking up for Messenger in what it touts as a “transition year” for the omnipresent messaging app.

First up, the social networking giant announced Project LightSpeed, which constitutes a completely rebuilt Messenger that the company said will be less than 30MB in size — more than two-thirds smaller than the existing Messenger app — and capable of launching in less than two seconds.

It’s worth noting here that Facebook already operates the Messenger Lite mobile app, which is around 25MB; however, that has been broadly designed for lower-end devices with limited RAM and has restricted functionality. It appears that Project LightSpeed aims to offer full Messenger features, built on an “entirely new code base,” Asha Sharma, director for Messenger consumer product, wrote in a blog post.

The company hasn’t given a specific time frame for its launch but did say that the feature would “take time to roll out.”

In other news, Facebook revealed that it’s launching a Messenger desktop app for Windows and MacOS. It has offered a desktop app for WhatsApp for several years already, though that app really just mirrors a user’s smartphone and lacks key functionality. It sounds like Messenger Desktop will be a true desktop app, with full functionality, including features such as group chat and video calls. 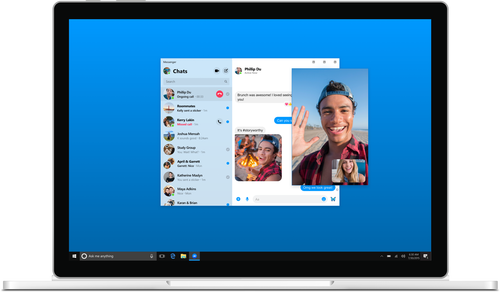 Above: Messenger desktop app is coming

In any case, this app is currently being tested and will launch around the world later in 2019.

Facebook teased a few other updates that are coming to Messenger, including new social features that build on Mark Zuckerberg’s recently stated mission to make Facebook and its associated properties more private. This effort includes what Zuckerberg referred to as a “digital living room,” and in the case of Messenger it will mean users get a “dedicated space” to find content from the people they message most through the platform. This will specifically involve “content from Stories to images and videos you share with each other, along with other features we’re building right now,” Sharma wrote.

Above: Dedicated space in Messenger for finding content from close friends and family

Related to this is a new social video-watching feature that allows Messenger users to watch videos together at the same time. Again, this fits into the “digital living room” narrative proffered by Zuckerberg last month and will build bridges between Facebook’s apps by enabling you to share a video from Facebook to Messenger and invite others to join in.

As with past upgrades, Facebook said it’s currently testing this new feature, which suggests that it will first be piloted with a subset of users — but the company does plan to launch it globally later this year. It’s clear that 2019 is shaping up to be a big year for Facebook, with reports surfacing back in January that the company was planning to unite its Messenger, WhatsApp, and Instagram apps while adding end-to-end encryption to all of its properties.

In her blog post, Sharma today reiterated Facebook’s plans for Messenger on the privacy front, saying that the company is “committed to making Messenger end-to-end encrypted by default,” noting that this will also make Messenger work more seamlessly with the company’s other services.

“We are working to be world class for our community for the primary things that people expect in a messaging app,” Sharma said. “We will make Messenger fast, private, interoperable, and a space for close friends and family.”