Facebook has seen its rapid assimilation of Earth’s population start to cool in recent years. The areas where it’s still exploding are, interestingly enough, some of the areas with the least access to technology: Africa, the Middle East, and India.

One measure of technological modernity is the smartphone. In the Western world, smartphone penetration hovers around 50 to 60 percent for most countries. However, in Africa, that number is much lower, around 17 to 19 percent across the continent. In India, smartphone penetration is just 9 percent. In the Middle East, a handful of countries’ smartphone adoption rates are at parity with their Western peers, but some, like Egypt, lag around 5 percent.

Even when you take away the smartphone aspect and look just at Internet access, you get a similar picture: a sharp divide between the digital haves and have-nots around the world. 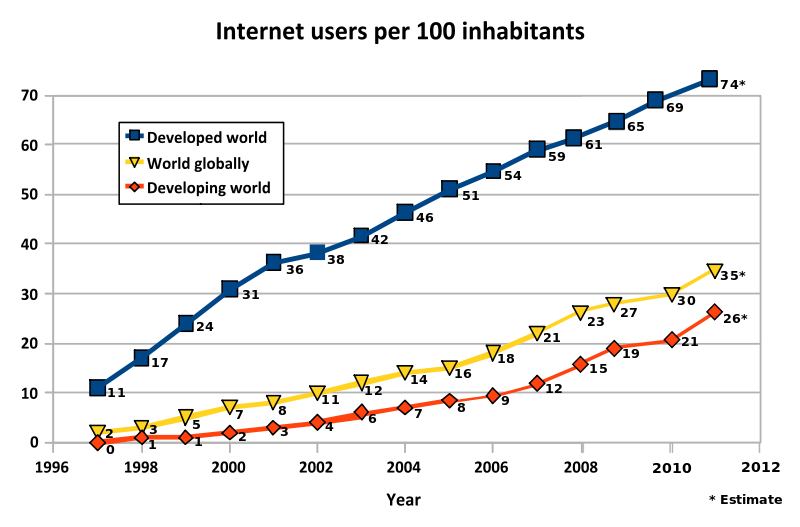 So it’s especially interesting that Facebook is making these less-connected populations a focus of its ongoing growth, seeing the lack of access as an opportunity to be addressed rather than an insurmountable hurdle.

In a report released today by marketing intelligence firm eMarketer, we learn that while Facebook’s growth has slowed or is quickly slowing to the single digits in the most highly developed areas around the world, it’s still seeing continued momentum in parts of Asia-Pacific, Africa, and the Middle East. Check out these numbers for 2013 and projected figures for 2017: 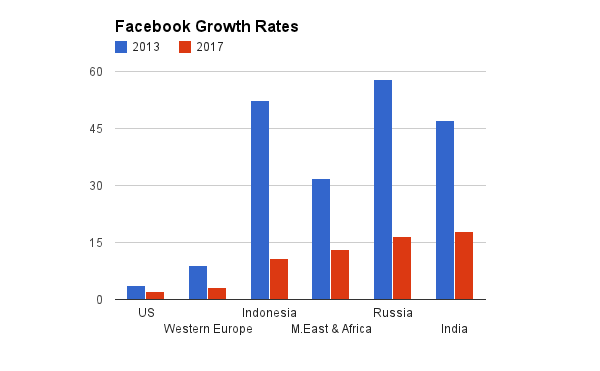 In some of these areas, especially Africa, Internet access via a traditional desktop or laptop computer is less common than access via a mobile phone. This is one reason Facebook has put emphasis on its mobile-only users, those users who never use a “regular” computer to log onto Facebook.com. That group swelled to nearly 200 million users this year.

The company’s quarterly earnings report this month also emphasized the growing need for a global scope in order for Facebook to continue its planned world domination.