Facebook announced its quarterly earnings today: $1.46 billion in revenue for the first three months of 2013. This shows a slight dip from earnings last quarter but a year-over-year increase of around 38 percent.

One of the more interesting aspects of the hard numbers, however, is the company’s continuing capability to gain traction outside the U.S. — and make money based on that traction.

Ads made up the majority of that figure, with just $213 million coming from payments and other fees, including the still-new Facebook Gifts.

As far as mobile goes, the company claims a growing number of monthly active users on mobile: 751 million, to be precise, up from 680 just last quarter. In fact, Facebook shows 189 million mobile-only MAUs — folks who only access Facebook via their phones.

Facebook CEO Mark Zuckerberg said in today’s earnings call that Home, its Android skin launched in April, is still in its infancy but will be pushed out more broadly within the next few months.

Here’s a look at the company’s revenue each quarter between 2011 and today: 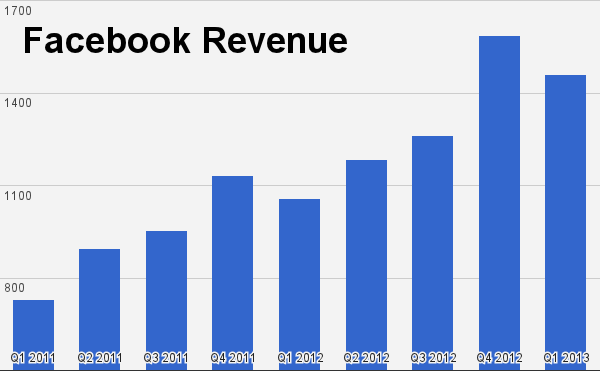 A lot of that revenue comes from advertising. Ads analyst firm eMarketer said in an email that while Google continues to dominate the online ad market, Facebook is on the rise, taking home 6.5 percent of all online advertising dollars spent in the U.S. this year, up by .6 percent since last year.

And one shining moment in that growth is mobile, which made up a full 30 percent of the company’s quarterly earnings. As eMarketer reps pointed out via email, “Last year Facebook — after its first year of selling mobile ads — became the No. 2 mobile ad publisher, by revenue, behind Google.” In 2013, Facebook may end up capturing as much as 13 percent of all U.S. mobile ad spend, which itself makes up a $7.29 billion marketplace.

“Real-time bidding is a fast-growing market; eMarketer estimates U.S. advertisers will spend more than $3.36 billion on real-time bidding this year, up from just under $2 billion in 2012 and less than $1 billion in 2011,” a firm rep stated, noting that Facebook is “well-positioned” to succeed in this market.

At this writing, stock ticker symbol FB is trading at $27.39. Here’s a look at the company’s stock price over the past six months and since its debut:

Compared to other large, well-established tech companies, Facebook is performing near the top of the class when you consider price percentage change over the past six months:

However, if you look at some of the newer tech stock debuts over the past year, you’ll see a precipitous slide following Facebook’s disastrous IPO, followed by a slow recovery: