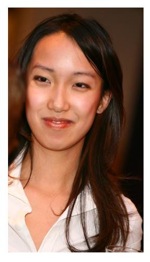 Author and entrepreneur Clara Shih gave a keynote speech at today’s Enterprise 2.0 conference in San Francisco that distilled many of the ideas in her book The Facebook Era. I already interviewed Shih about the book, but it was still compelling to see how her ideas have evolved — instead of talking about one big disruption (social networking), she talked about two (social networking and mobile). And instead of talking about “The Facebook Era,” she talked about “The Facebook and iPhone Era.”

Shih formerly led social networking strategy at Salesforce.com, and recently founded a social media marketing startup called Hearsay Labs, so she’s been looking at how social networking sites like Facebook change the way businesses can communicate and market themselves for a while now. Today she said businesses are seeing similar shifts brought about by popular smartphone platforms like the iPhone. Specifically:

Identity: Many aspects of our identity previously known only to friends have become much more public via social networks, and companies can use that data to advertise to us, she said. Smartphones add a layer of location-based and real-time information to those identities, so companies don’t just know your interests, but also where you are right now.

Communication: Communication is becoming more distributed, away from the one-to-one model of telephones, and from the Web 1.0 model where conversations are isolated on a specific site. Now services like Facebook and Twitter add a social layer to any web site or service. We can maintain many more social connections now, because they’re not active friendships that require a lot of work, but rather relationships that “we have the option but not the obligation to exercise.” Smartphones make it even easier to connect to these tools wherever you are.

Applications: Shih discussed both standalone applications (like the Faceconnector application she built to bring your Facebook social data into Salesforce’s sales tool) and the way companies have used social networks to accomplish business tasks (like when Aster Data asked its employees to scour their connections on LinkedIn to find a new database administrator).

Perhaps the most dramatic illustration of how quickly things have changed came at the beginning of Shih’s presentation, when she asked conference attendees how many of them were on Facebook in May 2007, and less than 10 percent raised their hands. Then she asked how many are on Facebook now, and almost every hand in the room went up.