Facebook is expanding its controversial Messenger Kids app beyond the U.S. and into Canada and Peru, the company announced today. Messenger Kids will now also be made available in Spanish and French in all three of its available markets.

With well over 1 billion users, Messenger is one of the most popular messaging apps in the world. And one way Facebook has sought to increase its stickiness further is by opening the platform to kids via their own standalone app. Messenger Kids originally launched for kids aged 6 to 12 in the U.S. last December, starting with iOS devices. Earlier this year, Messenger Kids arrived on Android, and Facebook added a new “sleep mode” feature to the service a few months back. 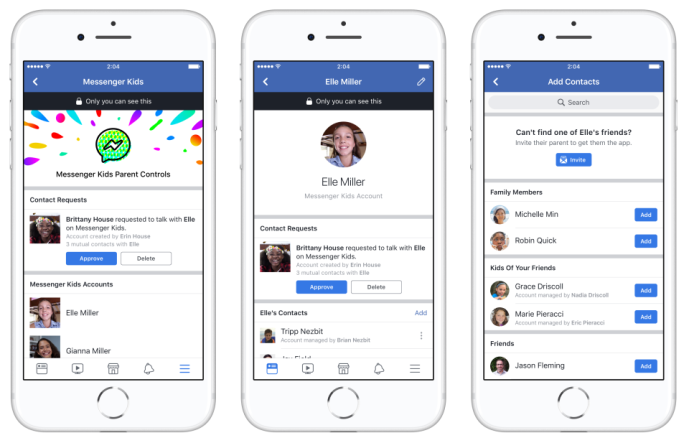 Parents install Messenger Kids on their child’s device, with the parent able to control settings via their own Facebook account. However, the app has courted significant controversy for encouraging children to use social networks at such a young age, while a report emerged this year highlighting the fact that many of the “experts” who had vetted the original Messenger Kids app were in fact funded by Facebook.

Nonetheless, the Messenger Kids train thunders on, and the company is showing no signs of cutting the service — despite widespread concerns that digital devices and social media can have a detrimental impact on children’s emotional and cognitive development.

But wait … Facebook has been paying attention to the outrage, and the social media giant has some additional news to share today. It has developed the Messenger Kids Pledge, which is a set of “guiding principles” aimed at parents and kids that “encourage the responsible use of Messenger Kids,” the company said in a blog post. So what does this involve, exactly? Well, it basically comes down to this — parents and kids are expected to agree to four points: Be Kind, Be Respectful, Be Safe, and Have Fun.

Will this appease the Messenger Kids naysayers?

In related news, Facebook has also introduced “kindness stickers” that are designed to “inspire kindness toward others.”

And there’s more — Facebook will also soon launch a new “appreciation mission” feature within the app as an interactive guide “that will encourage kids to discover and express appreciation for their friends and family.”

These new features will likely do little to garner hurrahs from concerned parents and child psychology experts around the world. But for parents who are excited about Messenger Kids, the company has a final piece of news that will probably be met with cheers. Up until now only one parent could control the settings within the Messenger Kids app, but beginning today, both parents will be able to control things from afar.