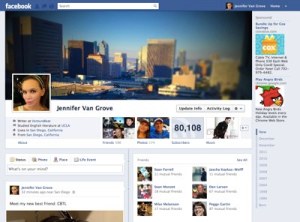 The story of your life, as told through your Facebook updates and photos, will be showing on an iPad near you come late January, according to a source.

The social network is planning to release a new version of Facebook for iPad with Timeline, optimized for the big screen, in early 2012, 9to5Mac reports.

Facebook Timeline is the company’s radical reinterpretation of the Facebook profile. The feature replaces the profile with a two-column, expandable scrapbook where status updates, photos and life milestones tell the story of your life. Timeline was introduced in September, and then gifted to all members on the web, iPhone and Android app users and mobile web users in mid December.

Timeline was also slated to appear inside the Facebook for iPad application in mid December, but the application was postponed due to bugs, a source told 9to5Mac. The app is now on a track for a mid-to-late January launch, but could be delayed further pending fixes and Apple approval.

“The large, Multi-Touch version of Timeline is described as very smooth and intuitive and a fusion of the web and iPhone/iPod touch versions,” according to the report.

Timeline on the iPad has the potential to drive home the significance of Facebook’s new feature to holdouts and naysayers. The form factor and touch-centric nature of the iPad more closely resembles that of a traditional scrapbook and would give members a way to tote around, flip through, view and showoff their most-prized memories in all their digital glory.