How you respond to your friends on Facebook is about to change, as the social networking company begins rolling out its new Reactions worldwide. The new feedback “emotions” offer you more ways to react to someone’s post by including responses such as love, laughter, excitement, sadness, and anger — similar to Pixar’s Inside Out characters. This feature is available on the Web, as well as on Facebook’s iOS and Android apps.

When you want to respond to a post, tap and hold the Like button — if you’re on the desktop, hover your cursor over it. Then, a small window will appear where you’ll be able to cycle through the different reactions. These new feedback options work on Pages too. 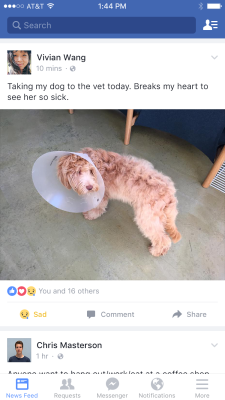 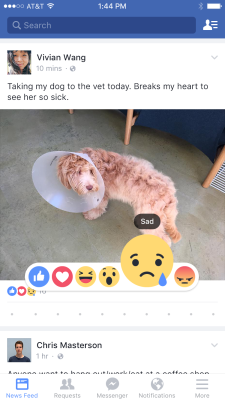 Facebook said that it’s taken them a year to get Reactions to where it is now. In a blog post, product manager Sammi Krug explained that the team has “conducted international research including focus groups and surveys to determine what types of reactions people would want to use most. We also looked at how people are already commenting on posts and the top stickers and emoticons as signals for the types of reactions people are already using to determine which reactions to offer.”

Optimizely’s vice president of product, Wyatt Jenkins, offered his thoughts on the launch: “Facebook’s decision to introduce ‘reactions’ is emblematic of a much greater paradigm shift that we are seeing across industries.” He added, “This shift is the result of a realization that a mix of qualitative and quantitative testing are key elements in making decisions, and the adoption of an experimentation culture that encourages a rigorous testing regimen in all parts of the business. There is a certain level of humility in this kind of decision-making.”

In September, while at one of Facebook’s town hall meetings, CEO Mark Zuckerberg acknowledged that his company was working on a change to the well-known Like button. “Not every moment is a good moment,” he stated at the time. “If you share something that’s sad, like a refugee crisis that touches you, or a family member passes away, it may not be comfortable to Like that post … I do think it’s important to give people more options than Liking it.”

And while this feature is likely a welcome addition for Facebook’s 1.59 billion monthly active users, it’s also going to be helpful to advertisers and the Social Graph, giving Facebook’s algorithm better context on how someone engages with a specific piece of content.

Although Facebook Reactions is officially launching today, the company had already been testing the feature with some users in Spain, Ireland, Chile, Portugal, the Philippines, Japan, and Colombia. We’re told that out of all the new emotions, Love was most-used across all markets. In addition, the number of daily Reactions used by people in Spain has doubled since October.

The new Reactions are available now, but if you don’t see the feature immediately, chances are that it’s still rolling out.