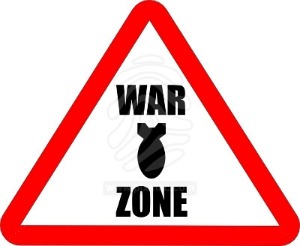 The battle of sass between Google and Facebook got a lot hotter today, when Google lobbed another grenade at Facebook’s policies on user data by specifically asking users if they want to potentially compromise their friends’ information by uploading it to Facebook.

Google essentially declared war last week on the social network by blocking Facebook from importing contacts from Gmail — a step Facebook takes to check to see which friends you email with might already be signed up for the social network — because, Google says, it believes “data should be free” and Facebook does not allow easy exporting of your friends’ contact information.

Now the search giant is striking back by allowing the file download, but first directing users to a sarcastically named “Trap My Data” page that asks them if they are “super sure” they want to be “locking up your contact data about your friends.”

In a multi-paragraph explanation, Google lays out its concerns about how Facebook may use the data it collects and even allowing any (potentially) outraged participants to click a box that will “register a complaint over data protectionism.”

Google, however, has engaged in similar data protectionism with its Orkut social network, a Facebook employee recently pointed out, in a move to fend off Facebook’s growing popularity in Orkut’s strongholds of Brazil and India..

How much this openness vs. proprietary ideology has to do with Google’s launch of its own rumored social network, Google Me, widely expected sometime this year, remains to be seen. But we can be sure that Google is declaring early on and vociferously that although Facebook may be by far the world’s most dominant player, it does not have the right to bully other competitors to play by its rules.

Hold on a second. Are you super sure you want to import your contact information for your friends into a service that won’t let you get it out?

Here’s the not-so-fine print. You have been directed to this page from a site that doesn’t allow you to re-export your data to other services, essentially locking up your contact data about your friends. So once you import your data there, you won’t be able to get it out. We think this is an important thing for you to know before you import your data there. Although we strongly disagree with this data protectionism, the choice is yours. Because, after all, you should have control over your data.

Of course, you are always free to download your contacts using the export feature in Google Contacts.

This public service announcement is brought to you on behalf of your friends in Google Contacts.

Register a complaint over data protectionism. (Google will not record or display your name or email address.)
Proceed with exporting this data. I recognize that once it’s been imported to another service, that service may not allow me to export it back out.

Select one or more options.