We may have finally found a legitimate use for Facebook’s Graph Search. 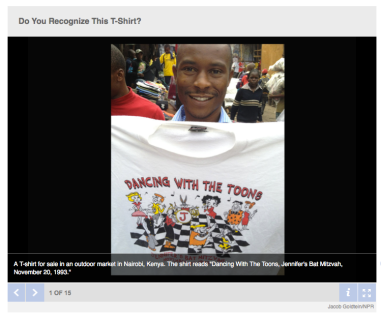 Above: NPR calls out for help finding a t-shirt in Kenya.

NPR recently challenged the Internet to find the original owner of a 1993 bat mitzvah t-shirt now being sold in Kenya. A man from Jewish news agency JTA found the owner (and the bat mitzvah-host) using one of Facebook’s biggest public data-analyzing tools: it’s Graph Search.

NPR wrote a story about what happens to your old t-shirts when they are donated to charity. Bags and bags of used clothing in the U.S. is sent overseas — a billion pounds of it annually, according to the NPR article. But one picture of a man in Kenya holding up a t-shirt from a 1993 Bat Mitzvah got the Internet humming.

The t-shirt shows a group of well-known cartoon characters dancing to Bugs Bunny on the drums. The writing on the shirt says, “Dancing with the toons, Jennifer’s Bat Mitzvah, November 20,1993.” Inside the shirt another name was printed: Rachel Williams.

NPR then issued the challenge, telling the Internet to find Rachel and the origins of the shirt.

Adam Soclof, the associate director of outreach and partnerships at JTA took up the challenge. And he succeeded using only two tools: Facebook Graph search and his own willingness to message random people on Facebook saying, “Is this old t-shirt in Kenya yours?”

Facebook released Graph Search in January this year. It’s a natural-language processing tool that can find results based on a number of different details. For example, you can search all your friends for people who went to your college who also like quinoa.

In Soclof’s case, he searched for anyone named Rachel Williams who also had a friend named Jennifer, could have been born around 1980, and had mutual friends with him. It can get that detailed.

Either because the world happens to be that small or because Facebook is that ubiquitous (it is), the search worked, and Soclof found both Rachel and Jennifer. Turns out both are now married and are originally from the Detroit area. Rachel’s name was imprinted inside the shirt because she once took it with her to camp. Her mother donated the shirt to a charity called Purple Heart nearly five years ago.

She told Soclof: “Three thoughts. First, I’m glad the shirt is getting used instead of sitting in a drawer or landfill. Second, I feel a bit guilty that some people have so little that they might end up wearing a silly shirt from my childhood. And third, I’m impressed that the name tag my mom ironed on for overnight camp has lasted this long!”

We’re impressed that Facebook’s Graph Search has real-world uses. Jokes aside, it’s a good example of how a company can apply data-analyzing tools to their vast stores of information, just waiting to be given meaning.

While this “actionable insight” might not have made anyone money, it shows us just how close we’re all connected and how many more of these connections we’re missing by letting information sit untouched in data centers.