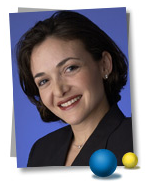 Facebook has been looking for a new #2 to run its burgeoning operations, following the departure of Owen Van Natta (our coverage). Today, the company has announced that it has hired Sheryl Sandberg, the outgoing vice president of global online sales and operations at Google, to be its new chief operating officer.

Sandberg is a long-time and well-respected leader at Google. She joined the company in 2001 and oversaw the development of its extremely profitable AdWords and AdSense operations.

“She has just about the most relevant industry experience for Facebook, especially since we need to scale our operations and scale them globally,” Facebook chief executive Mark Zuckerberg told Kara Swisher. “And we also share the same values.”