Social networking site Facebook today announced that it is adding new tools to let users share content with specific groups of friends, rather than publicly with all of their friends.

The site is also moving most of its privacy settings so that they appear alongside what is actually going on in the site. For example, you can approve or reject a photo tag from the actual photo rather than having to open up privacy settings in your specific account settings page.

“A lot of the controls we are adding are not new, it’s all about making it more usable,” Facebook product manager Kate O’Neil told VentureBeat.

The features sound a lot like those that appear in Google’s latest social network, Google+. Rather than sequester the privacy settings on a separate settings page away from the actual action on the site, Facebook is moving its privacy and sharing features straight to the main page. It removes a lot of the hassle of having to jump to different pages to tweak privacy controls.

“We’ve been working on this for over 6 months, working really closely with a bunch of privacy groups and users, and we’ve been building it for about six months or so,” O’Neil said. “When people feel comfortable with who they are sharing with, they share more and engage more with Facebook.”

Here are a few of the changes Facebook is making to its sharing and privacy controls. The company plans to roll the changes out over the next several days.

Specified content sharing — The site has added a drop-down menu on the window where you post a new piece of content. You can decide which friends or groups of friends can view the new content through that menu before you publish it. Those controls previously existed in a settings page that was a little more complicated to access. 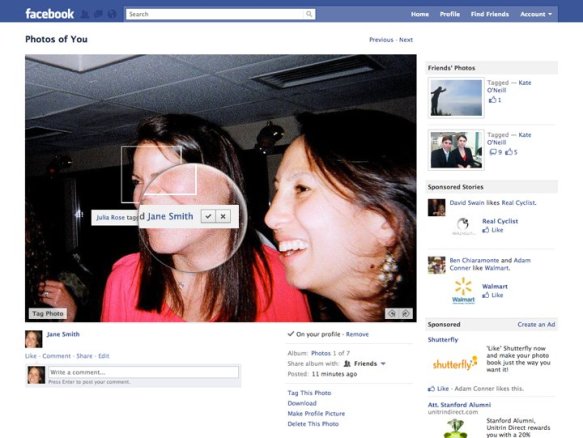 Tagging approval — Facebook users will also get a chance to approve a new photo tag or publication tag before it goes live with the new privacy controls. You can send a notification to someone who has tagged you in a photo asking to take the photo down or manually remove the tag. Facebook also includes the option to block someone who has tagged a photo of you. Until you approve the tag, no one can view it on your profile.

Review mode — You can now also see how your profile looks as if it were viewed by a friend or a new user looking to add you as a friend. It’s a feature that has been available on business social networking site LinkedIn for some time — but that site treats your profile more like a resume.

Locations and editing — You can now add a location to any of your content posts, similar to what you can do in Google+. You can also edit content pieces and change who can view those posts after the post goes up, rather than having to delete the post and post it again under a smaller circle.