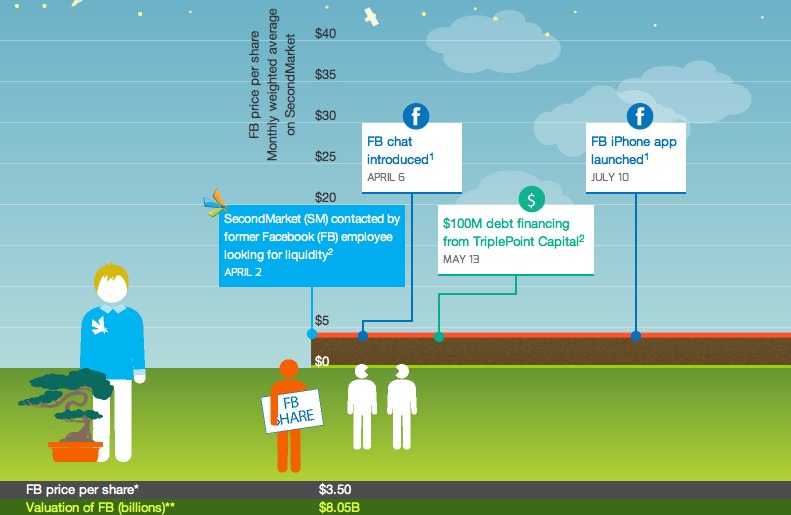 With all the hype around Facebook’s big day and the obsession with who’s-getting-rich numbers, its easy to forget to that we’ve had a front row view of Facebook’s ascendance to $38 a share, thanks to trading activity on secondary markets. One such market, SecondMarket, reminds us all of the social network’s humble beginnings with an illustrative timeline spanning the past four years.

“[Secondary markets] played a very important role in determining the ultimate price,” Sterne Agee senior analyst Arvind Bhatia told VentureBeat. “Facebook knew where the stock price was, and knew that there was appetite at those levels.”

Taking a nostalgic cue from Facebook Timeline, SecondMarket’s timeline takes us all the way back to April 2008 when the company was first contacted by a former Facebooker looking to offload shares and gain liquidity. It then walks us all the up until IPO day with a timeline of the Facebook’s historical pricing, acquisitions, and key product releases.

Back in 2008, Facebook was still four years away from going public, so would-be traders had little way of knowing that shares would add roughly $35 in value in the years ahead. In fact, it wasn’t until mid 2010 when the value of Facebook started to pick up, but by the end of the year Facebook was trading at $21.32 a share with a $49 billion valuation.

SecondMarket’s timeline even includes a breakdown of sellers and buyers by type and location. For instance, 86.4 percent of SecondMarket sellers were former Facebook employees, 27.5 percent of buyers were asset managers, and another 27.5 percent hedge fund buyers.

Now that Facebook is in Wall Street hands, we wonder: Can Facebook be cool as a public company?