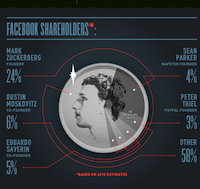 As a leader in social media, advertising and online influence, it’s surprising that ultra-powerful startup Facebook has managed to remain a privately held company for so long.

However, the high level of success Facebook has reached privately is likely to pay off when it finally files an initial public offering (IPO), which could raise over $10 billion.

The $10 billion IPO, which only three other companies (AT&T, General Motors and Visa) have ever achieved, isn’t very surprising. Facebook is arguably the most successful social network ever created — so much so that it’s transformed from being just a “network” to an expansive platform of communication, gaming, digital commerce and marketing. The reason Facebook was able to do this is because it’s ridiculously popular, serving over 800 million active users per month.

With that many people paying attention, the potential for generating a massive amount revenue is very high. In 2011, some speculate that the company earned $4.2 billion, but the coming year should prove even more successful. By some estimates, Facebook will account for nearly 17 percent of total U.S. advertising revenue in 2012, while its advertisements will account for 28 percent of all ads seen. This suggests that Facebook will earn more ad revenue than Google, Microsoft or Yahoo by the end of 2012.

But to give you a better understanding of how a Facebook’s IPO would compare with other successful publicly traded companies, check out the detailed infographic below. (Click image to enlarge.)