Facebook has confirmed that it is looking to bring back SMS support in Messenger and has also launched multiple account support. At least for now, both features are only for Android users.

Android Police earlier reported spotting these new features in the popular messaging service. Facebook Messenger used to have SMS integration, but the feature was removed in November 2013. At the time, Facebook said that the feature “just didn’t take off.”

At Messenger, we are always trying to create new ways for people to communicate seamlessly with everyone. Right now, we’re testing the ability for people to easily bring all their conversations — from SMS and Messenger — to one place. It’s a really simple way to get, see and respond to all your SMS messages in just one app. By choosing to access your SMS messages in Messenger, they’re right alongside all the other enhanced features that Messenger offers.

Facebook declined to say how many people are able to take advantage of SMS in Messenger. The test is only for a small number of Android users in the U.S. To see if you have the feature, check if you have a “Change SMS App” option in your Messenger settings. 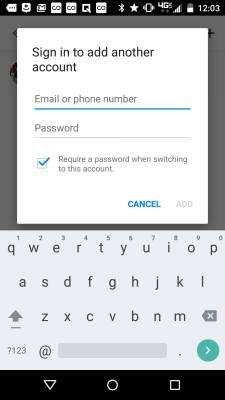 Above: Screenshot of adding multiple accounts to Facebook Messenger on Android.

With the growing importance of messaging among businesses to communicate with their customers, multiple account support has become crucial. Facebook confirmed that today it has launched a feature on Android to allow multiple accounts to exist on a single phone:

Millions of people share phones with their family and friends. Until now, there hasn’t been an easy way for people to access their individual Messenger accounts from shared devices. To address this, we’ve launched a feature on Android to enable multiple people to log in and use Messenger from a single phone.

With this feature, Facebook is allowing users to manage multiple accounts without having to constantly log in and out. To use this feature, open your account settings in Messenger and add users.

Multiple account support appears to be available worldwide and could benefit salespeople, customer service agents, and other professionals who often have to share the same devices or who run multiple pages.