Despite growing controversy around the Cambridge Analytica data privacy allegations, Facebook is pushing those concerns to one side today with the launch of two new features for its Messenger app.

The first of the tools is aimed at group admins, allowing them to essentially vet new members of group chats before they can join in. So if any non-admin decides to invite someone into the group, the group admin will have the final say.

“This is especially helpful in large group chats with people you may not yet be connected to, like when you’re planning a friend’s surprise birthday party with different groups of friends,” noted Messenger product manager Drew Moxon, in a blog post. “Admins also have the ability to remove members if needed, and promote or demote any other person in the group chat as an admin.” 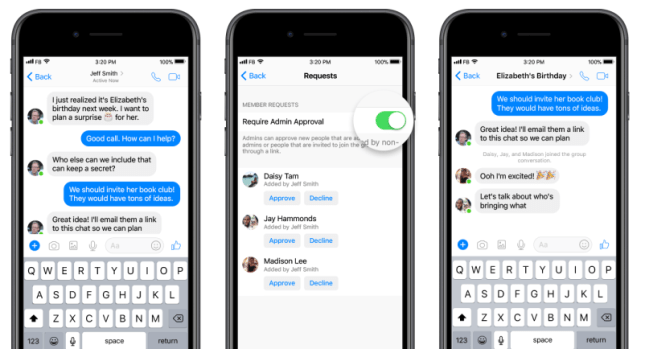 It’s worth noting here that the admin approval feature is off by default, meaning you’ll have to flip the little switch within the member requests section to activate it.

Additionally, Facebook has said that it will now allow anyone in a group to create a “joinable link” that can be shared through any other conduit, such as email. When the other person clicks on that link, they’re taken straight to the group — assuming they have Facebook Messenger installed on their device.

Today’s launch comes a month after Facebook rolled out a new Messenger feature that lets you turn one-to-one voice and video calls into group chats.

In the wake of the Cambridge Analytica scandal, a Delete Facebook campaign has been gaining momentum. WhatsApp cofounder Brian Acton is backing the movement despite having profited heavily from WhatsApp’s sale to Facebook. But the bottom line is that billions of people now rely on Facebook to keep in touch with friends, and the standalone Messenger app doesn’t actually require a Facebook account to use, so the latest controversies will likely have little effect on Facebook usage.

The company said that 2.5 million new groups were created in Messenger each day last year, and these latest features will likely contribute to growing that figure in 2018.