In the new app, users can create individual chatrooms around various topics they’d like to discuss, customize the color and design, invite others to join them via QR codes that can be shared, and hold anonymous discussions within the room. In a post on Rooms’ blog, Facebook’s product manager Josh Miller writes:

A room is a feed of photos, videos, and text – not too different from the one you have on Instagram or Facebook – with a topic determined by whoever created the room. Early users have already created rooms for everything from beat boxing videos to parkour to photos of home-cooked meals. There’s even a room called “Kicks From Above” that showcases photographs of cool shoes in cool places.

This isn’t the first time Facebook has dabbled in popular social app concepts pioneered by others. Facebook launched Poke back in December 2012 as a first shot at a Snapchat clone. After Poke went nowhere, it launched Slingshot in June of this year.

Though it’s not hard to see how the popularity of apps like Secret and Whisper may have inspired Facebook to delve into anonymous sharing, Yik Yak is likely the biggest inspiration here. About a month ago, two weeks before the New York Times’ report on the upcoming anonymous app, Miller — who is also the cofounder of the Facebook-acquired Branch and the lead of Rooms — sent the following tweet: 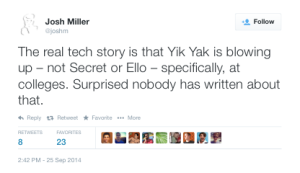 Though Yik Yak is similar to Secret and Whisper in that it enables anonymous socializing, it also relies heavily on location as a means to group conversations thematically. For example, Yik Yak’s been launching on college campuses as a way to help students chat about the goings-on in their communities.

Along with Miller’s interest in Yik Yak, let’s not forget what Branch, his former startup, was all about: topical conversations in an invite-only online setting. It wasn’t anonymous (actually, the opposite), but Branch nevertheless was built around “chatrooms” revolving around a topic, just like Rooms.

Rooms is also an experiment that’s as anti-Facebook as it can get.

As mentioned, Facebook’s entire being has revolved around real identities, which arguably gave it an edge over other social networks like MySpace. However, this issue landed the company in hot water recently when it wouldn’t allow drag queens to use their stage names on Facebook, an issue that put alternative network Ello in the spotlight.

Along with the idea of connecting “real” people around the world, Facebook released Facebook Connect (now Facebook Login) in 2008, as a way to let its users easily login into other apps and websites, as well as enable those apps to pull various levels of information from users’ profiles. Entire businesses (Lyft, Tinder) were built around Facebook users’ real identities. In addition, people can comment on sites all over the Internet using their Facebook profiles.

But with Rooms, users can shield their names. They can anonymous chat and say whatever they want without it being tied to their identities and potential judgement from others. According to Miller:

One of the things our team loves most about the Internet is its potential to let us be whoever we want to be. It doesn’t matter where you live, what you look like or how old you are — all of us are the same size and shape online. This can be liberating, but only if we have places that let us break away from the constraints of our everyday selves. We want the rooms you create to be freeing in this way. From unique obsessions and unconventional hobbies, to personal finance and health-related issues — you can celebrate the sides of yourself that you don’t always show to your friends.

Moreover, giving users free rein to customize the rooms they create (including colors, Like buttons, name, and so on) is a big deal. Unlike MySpace in the early 2000s, Facebook has created a one-size-fits-all design and has stuck to this approach.

But it’s not clear what the company will do with Rooms if it does take off: Monetizing it would be difficult, as plugging the app into Facebook would defeat the purpose of anonymity. But given Facebook’s lack of success with its previous experimental apps (Poke died and Slingshot is pretty forgotten now), it’ll be interesting to see if anonymity is the experiment that sticks for Facebook.