Facebook has introduced a new place for all our sports conversations. Called the Sports Stadium, it’s a virtual area where you, your friends, and 650 million sports fans on the social network can talk about games, teams, stats, and more. It’ll also feature live play-by-play action — just like you’d see on ESPN, but with more of a community around it.

You might think: why use Facebook when there’s already conversations taking place on Twitter? It’s a tough call, but it’s likely to get more people engaged on the social network and there’s certainly the potential for hundreds of millions more than what Twitter could muster (1.55 billion monthly active users vs 320 million). However, this isn’t the first time that Facebook has rolled out ways to get conversations going amongst its growing community so it seems that its experiments worked out well in the past.

While Twitter has become the place for real-time chatter, Facebook isn’t content to let it sit with the title. So the Sports Stadium is just one of the most recent efforts to compete in the second screen space, perhaps thinking that its threaded comments and features like photos and videos in a centralized place will be more appealing versus regular chatter and Twitter Moments.

This new sports-only area is rolling out today for American football games, just in time for Super Bowl L in Santa Clara, California. It will add other sports, like basketball and soccer, soon. It’s initially only available on Facebook’s iOS app for those in the United States, with additional platforms supported “in the coming weeks.”

To access the Sports Stadium, search by game in Facebook’s main app. There you’ll find a dashboard featuring commentary, news, individual plays, live scores, and more. It’s designed to function as a second-screen experience, so while you’re watching your favorite team score, you can trash talk all you want or discuss why the previous play should be overturned. 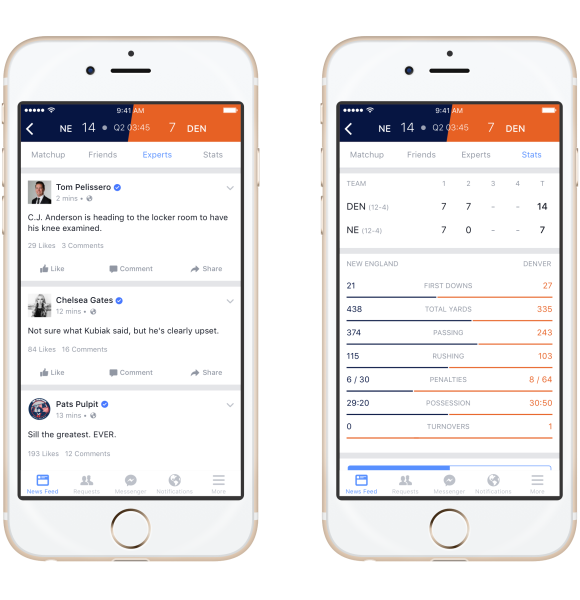 “Sports is a global interest that connects people around the world,” the company said in today’s blog post. “This product makes connecting over sports more fun and engaging, and we’ll continue listening to feedback to make it even better.”

Showcasing sports isn’t anything new for the social network; the difference is that now it has a dedicated hub. Before today, you could post that you were watching a particular game as a status update, and your post would be displayed along with the current score. At last year’s Super Bowl, Facebook also rolled out a special page, similar to the Sports Stadium, just for the game, as well as a page for the Manny Pacquiao and Floyd Mayweather boxing match in 2015.

While you’re able to get most of the play-by-play and stats about a game from traditional broadcasters like ESPN, CBS Sports, and Fox Sports, Facebook offers social chatter, as well.

We tested out Sports Stadium by looking for Saturday’s upcoming AFC Championship game between the New England Patriots and Denver Broncos game. Finding the dedicated hub for it wasn’t hard, but it also wasn’t the most intuitive to use. Facebook said that it’s going to be “surfacing new ways to get there as the product evolves.” Currently, you can’t just type in one team — you have to enter the entire matchup before you’ll see the hub.

Once there, you’ll see the most recent plays, which you can like, comment on, or share. It’s featured in a carousel format so you’ll always be able to know what the last five plays were. Below that are videos from media outlets such as CBS Sports and NBC. Once the game is live, this area could be populated with highlights, or even animated GIFs for people to share.

The Sports Stadium tells you which of your friends are watching the game, while also providing you with expert commentary from the teams themselves, as well as from media personalities, and more. Lastly, there’s a stats window for all you diehard sports fans out there.

With this effort, Facebook is seeking to pull more people away from Twitter and bring the real-time conversations right into its social network. Just wait until football season is over and basketball is supported, then eventually the World Cup, and even the Olympics.