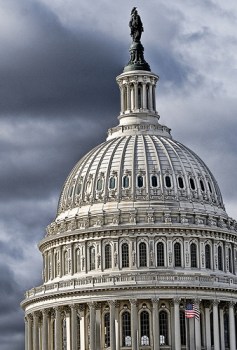 Facebook has been gradually boosting its profile in Washington D.C. over the past year and is on the hunt for a second senior lobbyist to add to its office of four. Disclosures released a few days ago show that, on top of lobbying the usual suspects Internet companies reach out to like the Federal Trade Commission and the U.S. senators and representatives, the fast-growing social network has also been busy deepening ties to government intelligence and homeland security agencies.

Facebook spent $41,390 on lobbying in the first quarter of 2010. That’s on top of the $207,878 it spent last year — the first year Facebook began releasing such disclosures. Although these numbers are tiny compared to the $4.3 million Google spent on lobbying last year, expect them to grow with the company’s influence and ambitions.

What’s interesting about Facebook’s lobbying in D.C. is what it spends money on despite its small size. It was the only consumer Internet company out of Google, Amazon, eBay, Microsoft, Yahoo and Apple to reach out to intelligence agencies last year, according to lobbying disclosure forms. It has lobbied the Office of the Director of National Intelligence — an umbrella office founded in the wake of Sept. 11 that synthesizes intelligence from 17 agencies including the CIA and advises the President — for the last three quarters on privacy and federal cyber-security policy. It has reached out to the Defense Intelligence Agency too.

Andrew Noyes, the company’s manager of public policy communications, says most of Facebook’s work in D.C. consists of basic education — helping legislators and agencies understand how to use the social network for campaigning, reaching out to their constituencies and in their regular line of work. The U.S. Navy used Facebook to alert Hawaiians of a possible tsunami from the Chilean earthquake earlier this year, while the company says 35 government agencies are using social media for governance.

At the very top of Facebook’s agenda in D.C. is privacy, he said. There’s much at stake. The ease of data collection and sharing on the web is on a collision course with privacy. The suite of projects the company unveiled yesterday at its f8 conference in San Francisco may spark further privacy concerns about the mass of data it will now be tracking on users as they traverse the web. To head off concerns that it is too cavalier with pushing users to be more public, Facebook made a savvy move when it brought longtime privacy advocate Tim Sparapani from the American Civil Liberties Union on-board last year.

Even though the company says its role in D.C. is about awareness for now, developing these relationships will help Facebook get ahead of and influence legislation that may curb its ad targeting abilities. For the last year, Rep. Rick Boucher (D-VA) has pledged that he would draft a web privacy bill, but little has come of it so far. Facebook’s competitor Google has already become a punching bag for privacy advocates; ten governments including France, Germany and the U.K. issued a letter to the search giant on Monday asking it to do more to protect consumer privacy, while legislators have asked the Federal Trade Commission to look into Google Buzz. 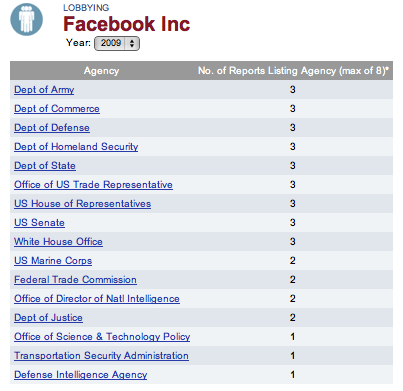