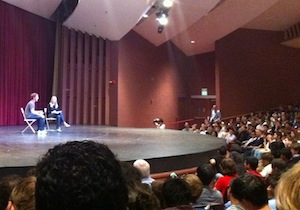 Speaking at incubator Y Combinator’s Startup School today, Mark Zuckerberg talked about how his attitude toward building a business has changed over the years.

His initial indifference toward revenue is almost legendary at this point, at least in the startup world. Even now, Zuckerberg said he’s not that interested in making money. Facebook is focused on gaining users and improving the experience for existing users, so any extra cash is just reinvested in the product, he said. That’s why the company is still run at “around” break-even level.

“There’s no point right now in having a massive profit,” Zuckerberg said.

Still, Zuckerberg’s attitude towards the company has changed, he said: Now he realizes, “Building a company is one of the most efficient ways in the world that you can kind of align the incentives of a lot of smart people towards making a change.”

Zuckerberg also talked about the accuracy of The Social Network, the film about Facebook’s early days. It’s revealing to compare what the movie got right and what it got wrong, he said.

On the one hand, Zuckerberg acknowledged that the movie got some details right. For example, “every shirt and fleece” in the movie is one that he has worn. On the other hand, he said the movie got his motivation for starting the company completely wrong. He said he definitely didn’t create the site to get girls, because he has had the same girlfriend, Priscilla Chan, since before starting Facebook.

(Though the narrative is a little more complicated than that, according to David Kirkpatrick’s book The Facebook Effect. Zuckerberg and Chan broke up, Zuckerberg had another girlfriend during Facebook’s early days in Silicon Valley, and they didn’t start dating again until 2006.)

The misunderstanding demonstrates the “disconnect” between Hollywood and Silicon Valley, Zuckerberg said.

“They just can’t wrap their head around the idea that someone might build something because they like building things,” he said.

Early Facebook employee Matt Cohler has made a similar statement about the film’s accuracy. Not that you’d expect Cohler or Zuckerberg to be completely impartial –since The Social Network is rather unflattering towards Facebook, and especially towards Zuckerberg, they have some personal and financial incentive to question its accuracy.