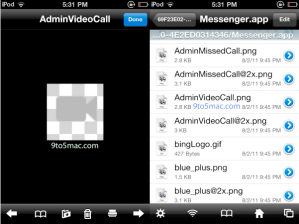 A hidden video conferencing feature was revealed within the code of Facebook’s new standalone messenger app, according to a report from 9 to 5 Mac.

The company revealed its mobile Facebook Messenger earlier today, as previously reported by Venturebeat. The app itself allows Facebook users to send real-time messages that integrate with both their profile and Facebook’s Chat and Messaging features.

According to the report, the video component found within the code should work on both Android and iPhone handsets. It’ll also likely tie in with Facebook’s recently announced Skype desktop video conferencing service.

A standalone Facebook Messenger app with video chat capability would be far more potent of a competitor against Google chat and Apple’s Facetime application.

The company was unavailable for immediate comment about the video conferencing features.

This isn’t the first time Facebook has let details of its future plans leak to the public. In July, a glimpse of Facebook for the iPad was revealed within the code of the company’s official iPhone app.