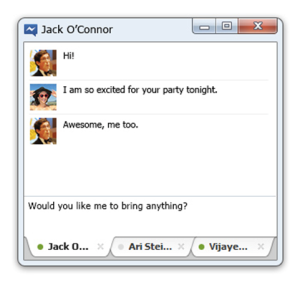 Facebook Messenger, which allows you to see and respond to Facebook activity, including chat messages, will allow users to keep up with their friends and Facebook activity directly from the desktop.

The app was previewed at the end of last year, but while the previous version was made available after a tech press leak, today’s version is the official release of the product.

“The app was largely built by our engineering team based in Seattle,” a Facebook spokesperson told VentureBeat this morning via email. The Seattle office was opened just shy of two years ago; at the time, Facebooker Ari Steinberg wrote that the site was chosen for its “strong history of innovation and is home to thousands of talented technical people who we want to help us solve the challenges of designing and building the next generation of Facebook.” Clearly, desktop apps were relatively high on the to-do list for this team. 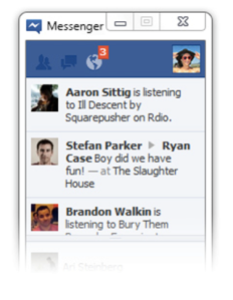 “Our focus is to enable people to access Messenger from the platform of their choice,” the Facebook rep continued. Right now, the app is live for Windows users only, but the team said a Mac app is also in the works. No word on a Linux version yet, my fellow neckbeards. The app is already available for iOS, Android, and BlackBerry mobile devices.

When you turn Messenger on, you’ll start getting Ticker-like notices. Ticker is the lightweight news feed that runs in your sidebar and features likes and other, low-priority updates from your friends. Ticker was announced last fall at Facebook’s f8 developer conference.

“You can see the latest updates from your friends in Ticker on Messenger,” said our Facebook spokesperson, “so you will see the items you would see in Ticker — tags, comments and more. The notifications you see are the same you would see when you access Facebook.com and are based on your notification settings.”