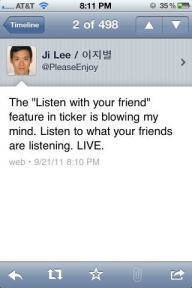 Ah, Twitter. Thank you for being a forum for slip-ups. A Facebook employee today accidentally tweeted about a new feature in Facebook’s hotly anticipated music service, expected to be announced tomorrow at Facebook’s f8 conference.

The employee, Ji Lee (@PleaseEnjoy) wrote on his Twitter, “The ‘Listen with your friend’ feature in ticker is blowing my mind. Listen to what your friends are listening. LIVE.”

Facebook’s Ticker is a feature in the newly updated news feed, which allows you to follow your friends’ actions in real-time. According to Lee’s tweet, you will be able to listen to music along with your friends as their song choices appear in the Ticker. The “Listen with your friend” option will sync you to their place in the song, as indicated by Lee’s “LIVE.”

The tweet comes on the eve of Facebook’s F8 conference, where developers and press alike expect to hear news about Facebook’s latest innovations. The conference is highly anticipated and many rumblings about the social network’s music service have surfaced. It also comes after a day after Facebook revamped its news feed.